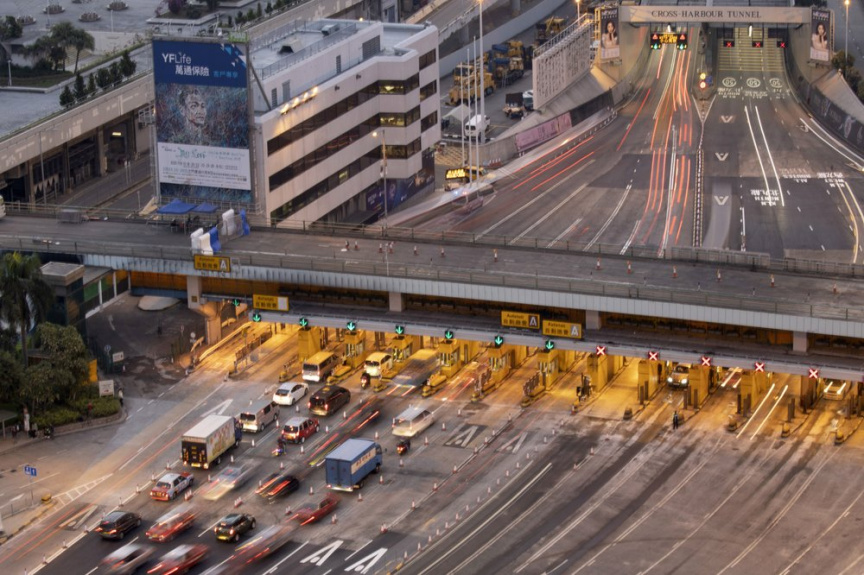 Vehicles queue up at the toll booths to enter the Cross-Harbor Tunnel, which has reopened, in Hong Kong on Wednesday, Nov. 27, 2019. Closed by protesters who took over the neighboring Hong Kong Polytechnic University, the tunnel has reopened after authorities repaired the damages caused. (AP Photo/Ng Han Guan)

HONG KONG (AP) — A major tunnel in Hong Kong reopened on Wednesday as a weeklong police siege of a nearby university appeared to be winding down, closing one of the more violent chapters in the city’s anti-government protests.

The Cross-Harbour Tunnel, which links Hong Kong Island to the rest of the city, had been closed for two weeks after protesters blocked the approach with debris and set the toll booths on fire as they fought clashes with police.

A search of the Hong Kong Polytechnic campus found just one woman, in weak condition, and a senior university official said it’s unlikely anyone else remains.

Attention meanwhile shifted to city leader Carrie Lam’s response to a major loss in local elections Sunday — a public rebuke of her tough line on the protests. Lam offered no concessions, saying only that she would accelerate dialogue and identify ways to address societal grievances.

She said the central government in Beijing did not blame her for the election setback, and that while it may have reflected unhappiness with the government’s handling of the unrest, it also showed that many people want an end to the violence.

“Let me just stress that after these five-six months, Hong Kong people have realized very clearly that Hong Kong could no longer tolerate this chaotic situation,” Lam told reporters after a weekly meeting with advisers. “Please help us to maintain the relative calm and peace that we have seen in the last week or so and provide a good basis for Hong Kong to move forward.”

Her refusal to compromise could spark more unrest at a time when the semi-autonomous Chinese territory has plunged into its first recession in a decade.

The pro-democracy bloc won control of 17 out of 18 district councils.

Lam said that when she withdrew an extradition bill in September that had sparked the protests, she also gave a detailed response to the protesters’ other demands, including free elections for the city’s leader and legislature and a probe into accusations of police brutality.

The government hopes to take advantage of the current lull in violence to accelerate public dialogue and set up an independent review committee to find solutions to deep-seated societal issues, she said.

“The next step to go forward is really, as you have put it, to engage the people. And we have started public dialogue with the community,” Lam said. “But unfortunately, with the unstable environment and a chaotic situation, I could not do more on that sort of engagement. I hope that the environment will allow me to do it now.”

Some pro-establishment figures have pointed fingers at Lam for their loss, while the pro-democracy camp has asked her to step down.

Protesters saw the extradition bill as an erosion of their rights promised when the former British colony returned to Chinese control in 1997. The demonstrations have since expanded into a protest over what they see as Beijing’s growing interference in the city.

Some analysts said China’s ruling Communist Party isn’t likely to soften its stand on Hong Kong. Chinese media have muted reports on the poll outcome, focusing instead on how pro-Beijing candidates were harassed and the need to restore law and order.

China’s foreign ministry on Monday summoned U.S. Ambassador Terry Branstad for a second time to demand Washington block the bipartisan legislation on Hong Kong. Vice Minister Zheng Zeguang warned that the U.S. would “bear all the consequences that arise” if the bill is signed by President Donald Trump.

Trump has not committed to signing it and has 10 days from the time of its passage last week to veto it. If he does not do so, it automatically becomes law. Congress could also override a veto with a two-thirds majority vote in both houses.

Trump told reporters Tuesday at the White House that is message to protesters is “We are with them.”

Trump cited his “very good relationship” with Chinese President Xi Jinping and that the U.S. was in the final stages of an important trade deal.

Derek Mitchell, a former U.S ambassador to Myanmar who heads the Washington-based National Democratic Institute, denied accusations that it had funded or supported the Hong Kong protesters. China has accused foreign forces and money of being a “black hand” behind the protests.

Mitchell, speaking in Hong Kong, said citizens had spoken “loudly and clearly” in the local election and that the government must respond to prevent the protests from sliding into an abyss.

“The ball is in the court of the government here and authorities in Beijing,” he said.