Home Minister calls on youths to restore peace and prosperity 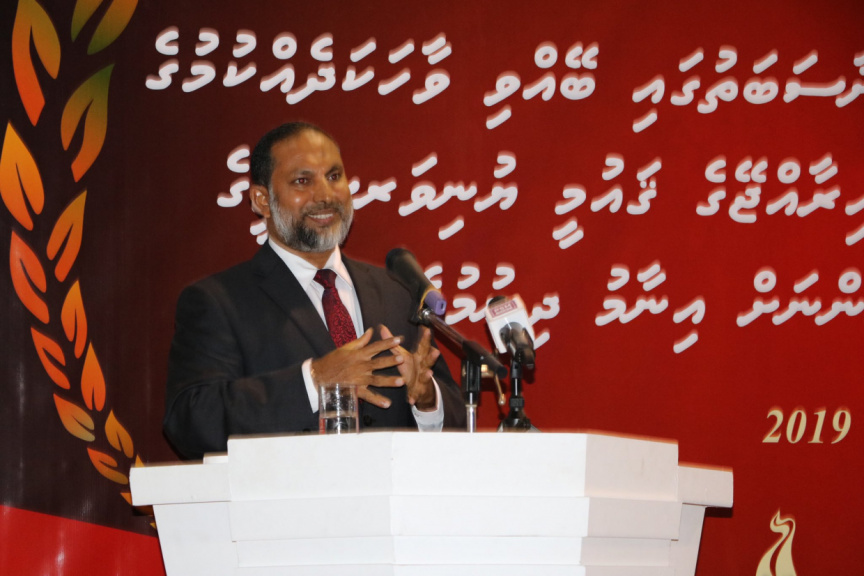 Home Minister Imran Abdulla speaking at the prize-giving ceremony of Maldives National Universities' Speaking Competition on November 23, 2019. The Minister called on youths of the country to work towards bringing back the peace and prosperity that the country was once proudly known for. (Photo/Home Ministry)

Home Minister Imran Abdulla has called on the local youth to work to restore the peace and prosperity that existed in the country before.

The Minister was speaking at the prize-giving ceremony of the Speaking Competition held by Maldives National University and its Student Union when he noted that the Maldives was once proudly known for the tranquility and peace that existed in the country. This has now changed according to the Minister who then stated that other countries brought positive changes without any conflicts.

“All the power to change the situation of the country currently lies solely in the hands of our youth leaders. We have to move towards peace, and prosperity through cooperation. Islam is a peaceful religion, that loves peace.” said the Minister.

The Minister also noted that a country is dependent on the number of strong youth leaders it creates. The leaders to make the country into a country is created from the student unions, said the Minister before noting that a beneficial future can only be predicted by the strength of the students of the university.

The Faculty of Law and Islamic Studies was named as the number one faculty from the competition. The second place was won by Business School and the third place was won jointly by Faculty of Arts and Center for Foundation Studies.

Student recognition awards were also presented at the ceremony to more than 160 students in three categories.

MNU to reopen for face-to-face classes

Over 50 % of elderly in Male’ suffer from depression