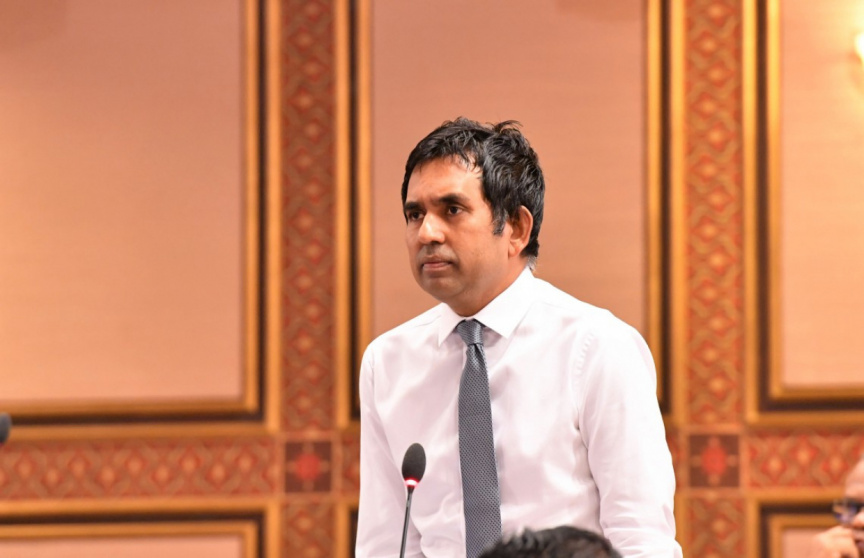 PNC deputy leader, Maavashu MP Mohamed Saeed says the proposed state budget for 2020 didn’t make any sense, and that the national debt was in danger of rising to MVR 91 billion by the end of the five-year term of the current government.

Saeed, who served as Economic Minister during the term of the previous government, issued the warning during the parliamentary debate on the budget this Sunday.

Saeed said that the MVR 37.5 billion budget had the largest recurrent expenditure in Maldivian history, with MVR 4.5 billion allocated for the management of government offices alone, and an additional MVR 1 billion in salary and allowances to public servants compared to 2018.

“The increase of MVR 1 billion within the span of one year is a huge issue. It’s a matter of grave concern,” said Saeed.

He also addressed the plan announced by Finance Minister Ibrahim Ameer to sell a samurai treasury bond worth USD 300 million to Japan.

Saeed said that the governor of central bank, Maldives Monetary Authority (MMA), hadn’t been made aware of the decision.

He also pointed out that the government would be adding an additional USD 1.2 billion to the national debt by the end of its five-year term with its decision to take out a loan of USD 1 billion from the Indian government, though USD 300 million will be converted to grant assistance.

“This amounts to a debt of approximately MVR 26 billion. So, adding this MVR 26 billion to the debt stock of MVR 71 billion mentioned by the Auditor General means the state will need to bear the burden of a MVR 91 billion debt stock within these five years,” said Saeed.

He expressed concern over insufficient income-generating plans on the 2020 budget to counter the debt.

“What’s there on this budget in terms of income generation? There isn’t anything to generate income given such a huge rise in the debt stock,” said Saeed.

He said the only plan to generate income was through taxation, which made up for 48 percent of the total income the state is projected to receive in 2020.

He said that while taxation was necessary, the government also needed to have a concrete plan as to how it would invest the tax money.

“There’s no need taxes imposed on fishermen, farmers, and the tourism industry if all the money will be utilized to fund trips abroad, to increase expenditure, to run offices, to increase political positions and other such purposes. Is this really the most appropriate approach for a country which is dependent entirely on the tourism industry for its income?” asked Saeed.

He said that the Maldives’s petroleum or its resource was its location, and that it needed to expand its economy.

He said that it was not a subject which required the two parties to lock horns over.

“The rightful value of Maldives is to become the richest in this region. We have the necessary resources,” said Saeed.

He said that the Maldives did not need to bow down to external pressures, and called on President Ibrahim Mohamed Solih to establish commercial independence in Maldives.

He accused the Maldivian government of selling the Maldives’ assets to foreigners in the name of privatization.

He said that the current government, which had assumed power by promising development without compromising the country’s fragile environment and rejecting “concrete development” had allocated over MVR 900 million for land reclamation projects alone.

He also said that the current government, which had criticized the previous government when it announced the plan to develop the Sinamale’ bridge, had allocated USD 300 million to build causeways to link the greater Male’ region.

Saeed expressed concern over the majority of development projects being concentrated to the greater Male’ region.

He also said that the government had spent MVR 1.7 billion on compensation payments to private parties this year, which amounted to MVR 4.6 million per day.

“This is unrefined large-scale robbery. This needs to be put a stop to,” said Saeed.

“If we hadn’t needed to make the settlement, the reserve would have had USD 1.1 billion. So the reserve balance rising to USD 1 billion isn’t novel. It’s already been accomplished in the past,” said Saeed.