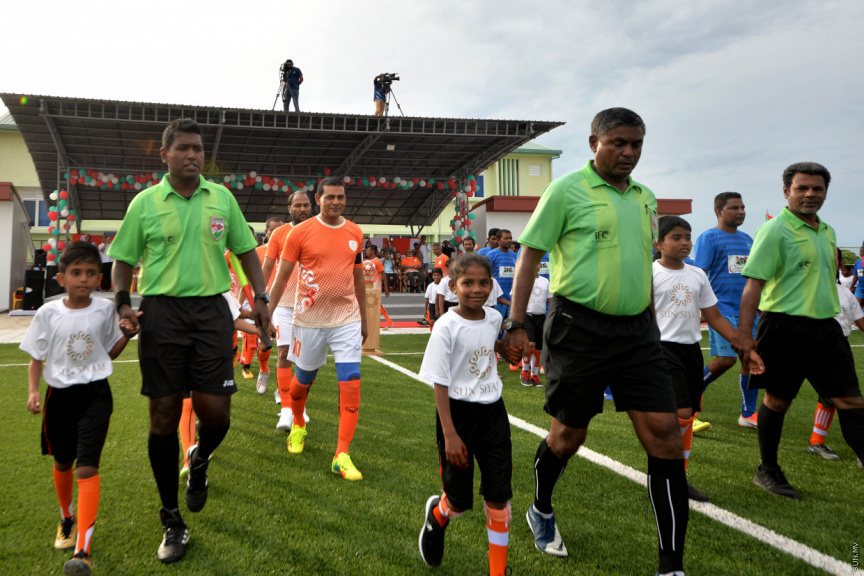 The new turf stadium by chairman of Sun Siyam Care and Meedhoo MP Ahmed Siyam on the island of Dh. Meedhoo opened last month will be hosting its very first tournament in November.

The tournament follows on the expectations of MP Siyam who stated in the opening remarks of the stadium that it will bring a great deal of opportunities and experience in training the upcoming generations, with the first tournament focused on players under the age of 17.

The tournament held by the Young Star club of Dh. Meedhoo will be held from 26-30 November and will be the third consecutive year that the tournament is held. Last year, the tournament was focused on players under the age of 15.

The tournament is aimed at increasing the support of the youth and children of Meedhoo towards football, according to Young Star club’s president Ibrahim Afrah.

The turf stadium was officially opened in October with a match played between a veteran’s team of MP Siyam and a veteran’s team of Dh. Meedhoo and was taken part by figures such as Kudahuvadhoo MP Ahmed Amir, former Kendhikulhudhoo MP Ali Mauroof and one of the most celebrated and respected players in Maldivian football, Saff championship winner and former national team captain Assad Abdul Ghani as well.