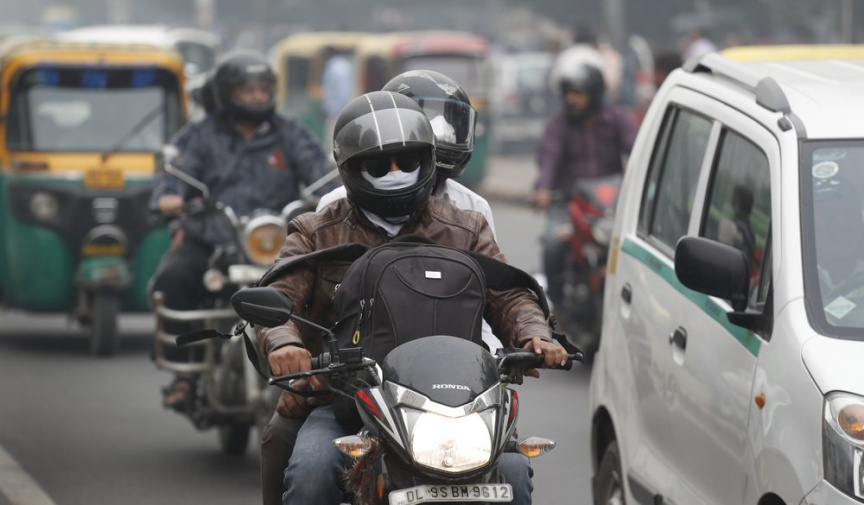 A motorcyclist drives past wearing pollution mask in New Delhi, India, Thursday, Nov. 14, 2019. Schools in India's capital have been shut for Thursday and Friday after air quality plunged to a severe category for the third consecutive day, enveloping New Delhi in a thick gray haze of noxious air. (AP Photo/Manish Swarup)

NEW DELHI (AP) — Schools in India’s capital are shut on Thursday and Friday after a thick gray haze of noxious air enveloped the city for the third consecutive day, and angry residents blamed authorities for holding an annual children’s race.

Buildings and monuments were largely obscured by smog and an official health advisory urged people to avoid all physical activity outdoors.

The air quality index exceeded 460, nine times the level recommended by the World Health Organization, according to the state-run Central Pollution Control Board. In some places, the index crossed the 500 level.

Residents took to social media and blamed authorities for allowing the run after pictures were shared of children without protective masks.

The event was organized to mark the birthday of India’s first prime minister, Jawaharlal Nehru, which is celebrated as Children’s Day in India.

“It was a symbolic event and children didn’t run beyond 200 meters,” organizer Amod K. Kanth told The Associated Press.

Kanth said the organization had permission from the authorities and he was not directed to cancel the event.

Many decried the rising pollution levels and said the government is not doing enough.

New Delhi is one of the world’s most polluted cities, and winters have become a time of annual health woes when the city is covered in a toxic haze that obscures the sky and blocks sunlight.

Doctors in the city of 20 million people say many of their patients are complaining of ailments related to the filthy air they breathe.

Air pollution in northern India, including New Delhi, peaks due to smoke from agricultural fires in neighboring Haryana and Punjab states which mixes with the city’s vehicle emissions and construction dust.

Authorities have resorted to emergency measures such as banning construction, reducing traffic and prohibiting the use of diesel generators. But the steps have had little effect because state governments have failed to cooperate in tackling pollution.

Prime Minister Narendra Modi has not spoken about the crisis, even though he frequently promotes government programs on Twitter and elsewhere.

Pollution was expected to decrease starting Thursday night when wind speed picks up, according to the India Meteorological Department.

WHO data released last year showed India had 10 of the world’s 20 most polluted cities.