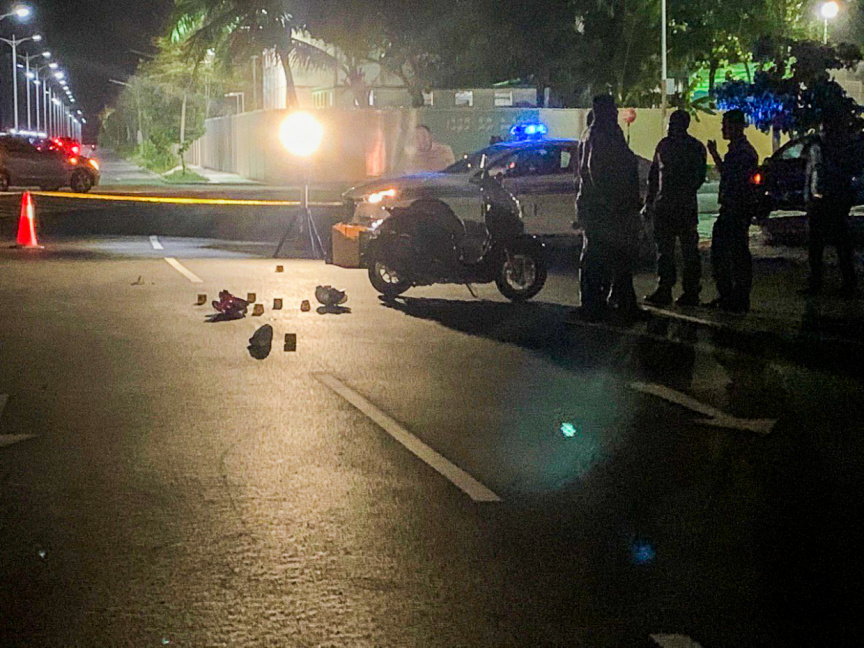 MTCC has stated that the driver of the bus that collided with a motorcycle on the Hulhumale’-Male’ highway last night in a deadly accident was not aware of the accident at the time.

The accident which resulted in the death of a 13-year old girl involved an MTCC bus driven by a 54-year old local man who is now in police custody. The collision with the bus killed Fathimath Anjum Shafeeq who was traveling on a motorcycle driven by her mother who luckily escaped without any serious external injuries.

"Bus driver unaware of accident, no signs of a collision on the bus"

MTCC CEO Hassan Shah spoke to “Sun” regarding the accident and confirmed that the accident happened near the bend on the Hulhumale’ side of the highway.

“The driver went on his way (after the accident) and only realized what had happened after Police stopped the bus in the middle of the highway. There isn’t a single scratch on the bus. The passengers on the bus were also not aware than the accident happened.” said Shah.

This regrettable accident brings back a not so distant memory of a Ukrainian tourist who was killed after being run over by another MTCC bus in May of 2019. The tourist was walking on the sidewalk near the ferry terminal when she was killed by the onrushing bus. The driver of the bus involved in the accident had fallen asleep at the wheel which was deemed as the cause of the accident.

A few days later an MTCC bus was involved in another accident with a car, also caused by the driver falling asleep at the wheel. The two dangerous accidents prompted MTCC to fire the two drivers involved.

Shah stated that this was not the case in last night’s accident and that the speed of MTCC buses had now been limited to 50 KM per hour.

“We have now made arrangements so that we can check the routes and speed of the buses. We can only say something regarding the accident after the investigation by Police is concluded.