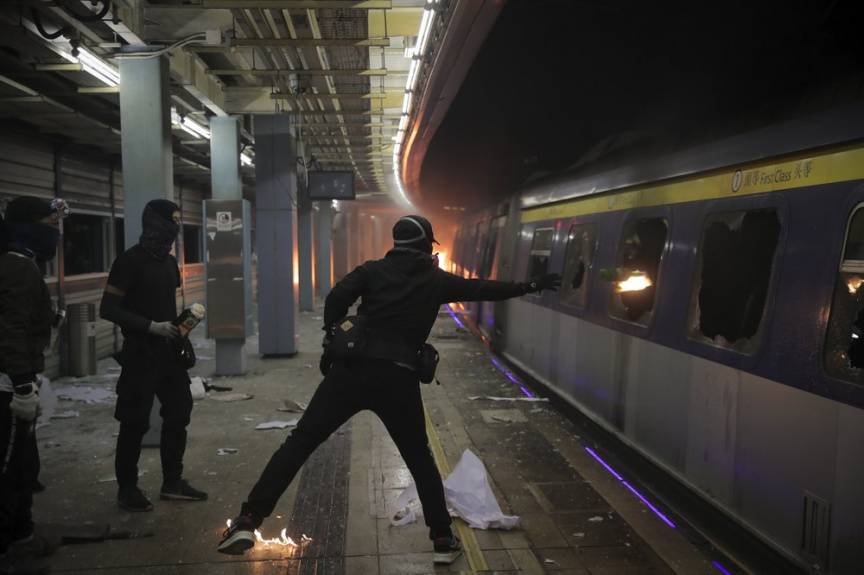 A student hurls a molotov cocktail into a train parked inside the Chinese University MTR station in Hong Kong, Wednesday, Nov. 13, 2019. Protesters in Hong Kong battled police on multiple fronts on Tuesday, from major disruptions during the morning rush hour to a late-night standoff at a prominent university, as the 5-month-old anti-government movement takes an increasingly violent turn. (AP Photo/Kin Cheung)

HONG KONG (AP) — Police have increased security around Hong Kong and its university campuses as they brace for more violence after sharp clashes overnight with anti-government protesters.

Many subway and rail stations were closed Wednesday after the protesters blocked commutes and vandalized trains. Classes were suspended at schools and universities.

Police and protesters battled on multiple fronts overnight at the Chinese University of Hong Kong. Gasoline bombs and fires lit the nighttime scene, and the situation remained tense in the morning.

A police official said protesters were carrying out insane acts and Hong Kong was on the brink of a total breakdown after more than five months of protests.