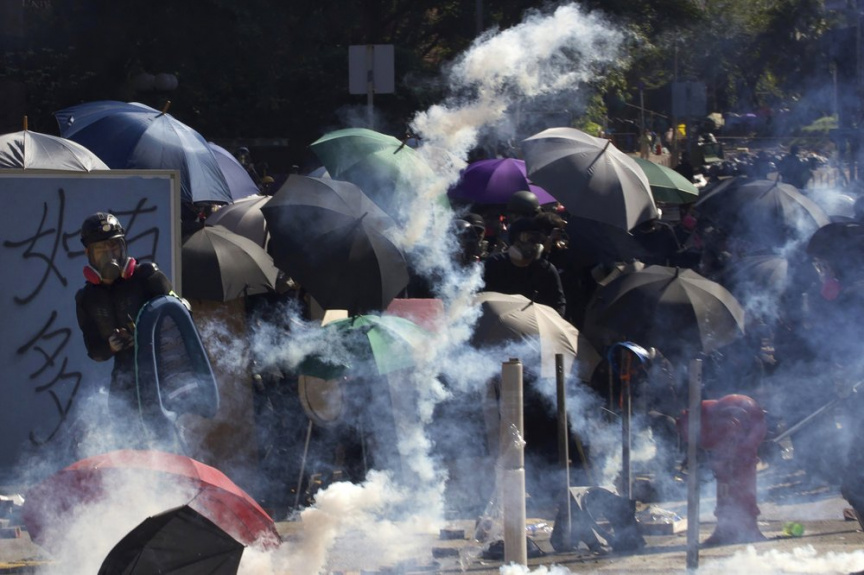 A large group of people arrived to try to clean up a debris-strewn roadway near the campus but were warned away by protesters.

Riot police lined up a few hundred meters (yards) away and shot several volleys of tear gas at the protesters, who sheltered behind a wall of umbrellas across an entire street.

The faceoff came hours after intense overnight clashes in which the two sides exchanged tear gas and gasoline bombs that left fires blazing in the street. Many protesters retreated inside the Polytechnic campus, where they have barricaded entrances and set up narrow access control points.

Protesters, who occupied several major campuses for much of last week, have largely retreated, except for a contingent at Polytechnic. That group is also blocking access to the nearby Cross-Harbour Tunnel, one of the three main road tunnels that link Hong Kong Island with the rest of the city.

Elsewhere, workers and volunteers — including a group of Chinese soldiers who came out from their barracks — cleared roads of debris Saturday as most of the protesters melted away.

There were scattered incidents of protesters arguing and clashing with people clearing roadways, and in one instance, throwing a gasoline bomb near City University of Hong Kong.

The city’s anti-government protests have been raging for more than five months.

They were sparked by a government decision to submit legislation that would have allowed the extradition of criminal suspects to the mainland. Activists saw it as an erosion of Hong Kong’s autonomy under the “one country, two systems” formula implemented in 1997, when Britain returned the territory to China.

The bill has been withdrawn, but the protests have expanded into a wider resistance movement against what is perceived as the growing control of Hong Kong by Communist China, along with calls for full democracy for the territory.