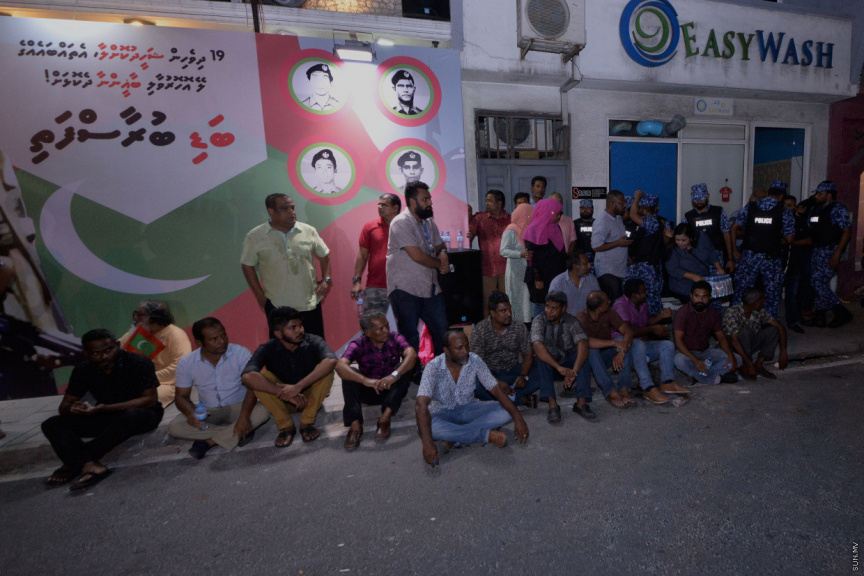 The protests named “Badi Buraasfathi” organized by the opposition PNC-PPM Coalition to celebrate Victory Day last night saw police detain 12 people for a few hours before releasing them. The protest was broken up by Police shortly after it began. PNC President and former L. Fonadhoo MP Abdul Raheem Abdulla (Adhurey) estimated that the protests were attended by around 2000 people.

“Around 2000 people gathered here tonight even with the sudden change of location. There are still 500-600 citizens on the road here,” said Abdul Raheem, before criticizing police for breaking up the protests. Abdul Raheem also stated that the protests had scared the government.

“We will not stop protesting once we begin unless we have reached a solution. The governing MDP knows this very well, that is why they are scared.” Said Abdul Raheem.

Despite the PNC leaders’ estimates, coalition party PPM’s chief spokesperson Heenaa Waleed texted media that the protest was taken part by around 100 people. Journalists at the scene had also reported numbers less than 200 at the protest.

Police warned that protesting in the area was not permitted and called on protestors to leave the area before breaking up the protest and arresting 12. Police informed that the 12 people were arrested for failing to obey police orders and for obstructing police officers.

Police had also released a statement last night stating that it had noticed unlawful protests and activities that were being organized after the opposition PPM-PNC coalition had already announced the protests for last night. Police also began warning protestors to leave the area as soon as the protests began last night and announced that the area was not designated for such activities.

The right to freedom of peaceful assembly, is a fundamental right enshrined in our Constitution & in a number of international agreements such as UDHR and ICCPR. We call on @PoliceMv to not recourse to force & obstruct the peaceful assembly organised by PPM/PNC coalition.

The protest and detentions saw Transparency Maldives call on Police to stop the use of force to break up opposition protests and to uphold the right to protest which is granted under the constitution and international human rights conventions.

Under the amendments brought to the Freedom of Peaceful Assembly Act during President Yameen’s administration, protests and marches can be held after a letter permitting the protest is issued by Police. The amendments were then supported by the PPM MPs in the parliament.