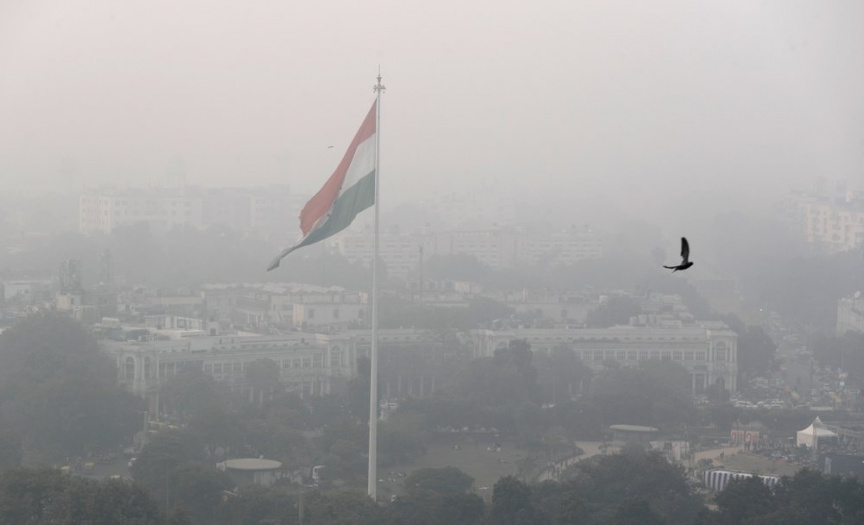 A bird flies past as Delhi's sky line is seen enveloped in smog and dust in New Delhi, India, Friday, Nov. 1, 2019. An expert panel in India's capital has declared a health emergency due to air pollution choking the city, with authorities ordering schools closed until Nov. 5. (AP Photo/Manish Swarup)

The Supreme Court-appointed panel is also temporarily banning construction activity in the New Delhi region to control the dust in the air.

Air pollution in New Delhi generally peaks around Nov. 1 due to a combination of smog from fireworks set of during a Hindu festival and smoke from the burning of agricultural fields in the neighboring states.

The air quality index reading at the U.S. Embassy in New Delhi for pollution particles in the air reached nine times the recommended WHO level on Friday. At such levels people are advised to avoid all outdoor exertion due to the health risks.

Private cars running on petrol and diesel will be allowed in New Delhi only on alternate days from Nov. 4 to 15 depending on whether they have even or odd numbered plates.

Kejriwal said that similar restrictions in 2016 reduced air pollution up to 13%.

On Friday, he distributed free masks to groups of young children in the Indian capital.

India is home to many of the world’s most polluted cities.