European football weekend: What to watch in the main leagues 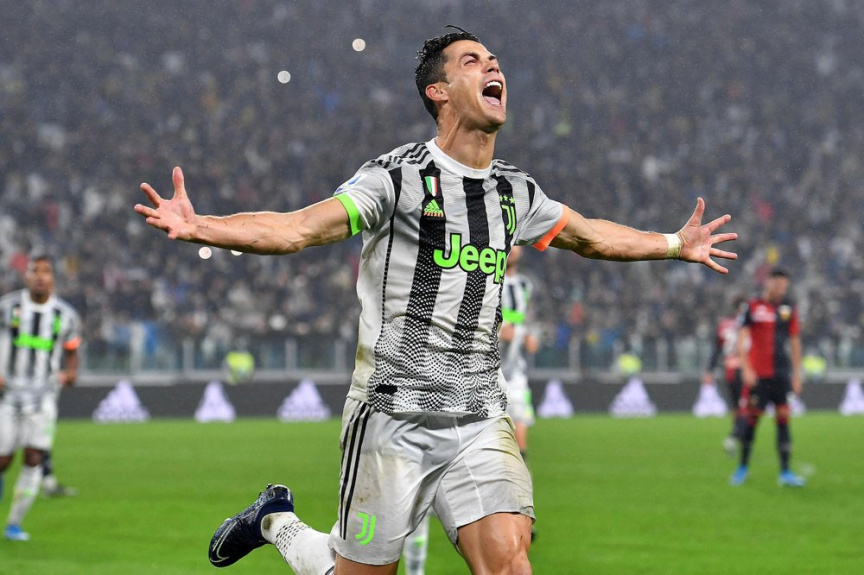 Juventus' Cristiano Ronaldo celebrates after scoring during the Italian Serie A soccer match between Juventus and Genoa at the Allianz stadium in Turin, Italy, Wednesday, Oct. 30, 2019. (Alessandro Di Marco/ANSA via AP)

What to watch in the leading football leagues in Europe this weekend:

Arsenal hosts Wolverhampton on Saturday after sliding to fifth in the Premier League by collecting only one point from its last two games. That came from a draw against Crystal Palace after throwing away a lead and seeing captain Granit Xhaka run into dispute with his own Arsenal fans.

North London rival Tottenham is faring even worse, traveling back to Merseyside on Sunday to play Everton after losing at Liverpool a week earlier to remain winless on the road in the league since January and in 11th place.

Leader Liverpool is at Aston Villa on Saturday holding a six-point lead over champion Manchester City, which hosts Southampton. The south-coast club was thrashed 9-0 in the last round by Leicester, which is flying high in third place.

The 11th round opens with Manchester United only ahead of opponent Bournemouth on goal difference and 15 points behind Liverpool in seventh place.

— By Rob Harris in London.

With Lionel Messi coming off his best performance of the season, Barcelona is at Levante on Saturday chasing a sixth consecutive league win.

Messi scored twice and had two assists in the champion’s 5-1 rout of Valladolid on Tuesday. Barcelona is one point in front of Real Madrid at the top of the standings.

Barcelona and Real Madrid have a game in hand because their “clásico” match scheduled for last weekend was postponed until December because of a separatist rally in the Catalan capital.

— By Tales Azzoni in Madrid

He needs just five more goals to reach 200 for PSG and, if selected ahead of Mauro Icardi, the club’s all-time leading scorer will be confident of getting chances against the league’s last-place side.

Cavani came on as a substitute in Sunday’s 4-0 home win against Marseille but has not started a game since sustaining a hip injury on Aug. 25.

However, PSG coach Thomas Tuchel will be without injured midfielders Marco Verratti (calf) and Ander Herrera (ankle), while center half Thiago Silva is ill and has also been left out.

Although PSG has already lost two league games, there is little competition at the top and the defending champion has an eight-point lead over second-place Nantes.

Boosted by an 8-0 home win in the League Cup on Wednesday night, Nantes travels to play Bordeaux on Sunday.

Third-place Lille is one point behind Nantes and on Saturday is away at Marseille, which has won only one of its past seven matches.

— By Jerome Pugmire in Paris.

Juventus is unbeaten ahead of the Turin derby against Torino at the Stadio Olimpico on Saturday.

Roma and Napoli are both on five-match unbeaten runs ahead of Saturday’s lunchtime meeting, but experiencing mixed fortunes. While Roma has gained confidence and climbed to fourth under new coach Paulo Fonseca, Napoli has sunk to sixth.

—By Andrew Dampf in Rome.

Promoted Union Berlin hosts Hertha Berlin in the highlight of the German league’s 10th round on Saturday. It’s the first meeting of the capital’s biggest clubs in the Bundesliga and it comes one week before the city celebrates 30 years since the fall of the Berlin Wall.

Union warmed up with a 3-1 win at Freiburg in the German Cup on Tuesday, while Hertha has a day less to recover after a penalty shootout win over Dynamo Dresden on Wednesday.

The clubs previously enjoyed a friendly relationship going back to when the city was divided, but the rivalry has developed in recent years, particularly since the sides competed in the second division.

— By Ciarán Fahey in Berlin.