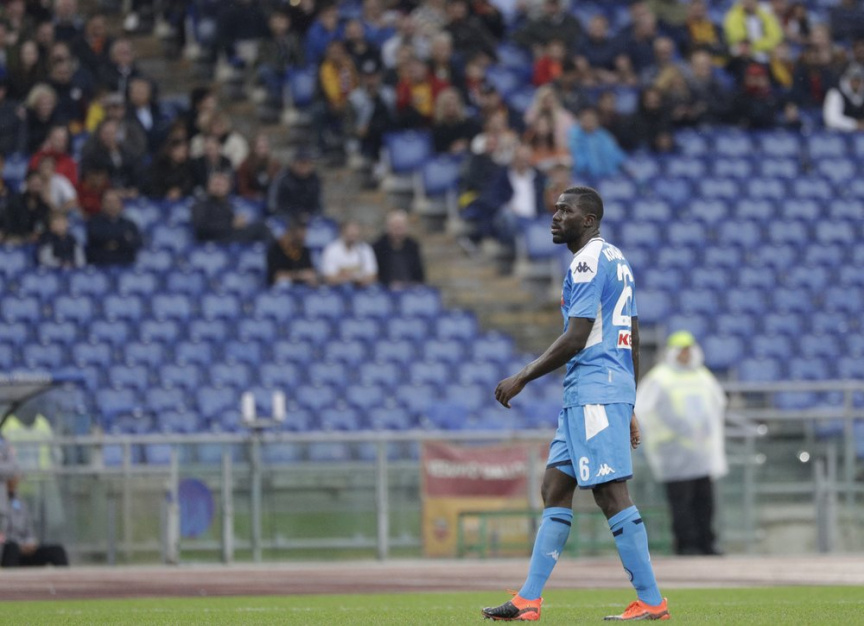 Napoli's Kalidou Koulibaly walks the pitch as the match was briefly suspended because fans were making racist chants against him, during an Italian Serie A soccer match between Roma and Napoli, at the Olympic stadium in Rome, Saturday, Nov. 2, 2019. (AP Photo/Gregorio Borgia)

ROME (AP) — Discriminatory chants prompted a Serie A soccer game between Roma and Napoli to be briefly suspended Saturday.

Referee Gianluca Rocchi made the decision in the second half after Roma fans aimed anti-territorial chants at Napoli. Such chants are often used by supporters to deride an opposing club’s city and are treated by officials in the same manner as racist chants.

The game resumed after a few minutes.

An Associated Press photographer next to the pitch also heard sporadic racist chants aimed at Napoli defender Kalidou Koulibaly, who is black.

Rocchi had already ordered an announcement to be made over the Stadio Olimpico’s public address system asking fans to stop the chants.

During the suspension, Rocchi gathered teams in the center circle, then Roma forward Edin Dzeko encouraged fans to applaud rather than jeer the opposition.

“Since my Italian is not good I didn’t really understand what happened but I’m against any sort of territorial discrimination,” said Paulo Fonseca, Roma’s Portuguese coach, adding that incidents like these happen “in many matches all over the world.

“To me, it was more important to see our captain (Dzeko) talk to the fans and see that it didn’t occur again,” Fonseca added.

Roma led 2-0 at the time of the suspension before going on to win 2-1.

Italy’s top tier has been marred by several incidents of fan racism this season.