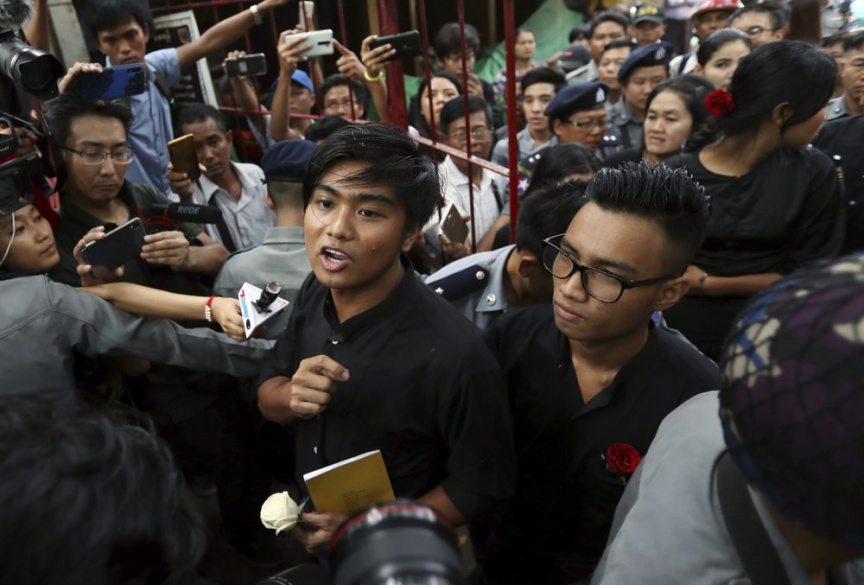 Zayar Lwin, left, member of Student Union and a leader of Peacock Generation "Thangyat" Performance Group, talks as he leaves a township court along with his colleague Paing Phyo Min, right, after their trial Wednesday, Oct. 30, 2019, in Yangon, Myanmar. (AP Photo/Thein Zaw)

YANGON, Myanmar (AP) — A court in Myanmar on Wednesday sentenced five members of a traditional theatrical troupe to a year in prison for their gibes about the military.

The members of the Peacock Generation thangyat troupe were arrested in April for performances during celebrations of Myanmar’s traditional new year in which they poked fun at military representatives in parliament and military involvement in business. The military is a powerful political force in Myanmar even though the country has an elected government.

Thangyat combines dance and music with verse that often has a satirical edge. The five were convicted under a law prohibiting the circulation of information that could endanger or demoralize members of the military.

“This is an appalling verdict. Punishing people for performing a piece of satire speaks volumes about the dire state of freedom of expression in Myanmar,” said Joanne Mariner, research director for Southeast Asia for the human rights organization Amnesty International.

“These activists are prisoners of conscience,” she said in an emailed statement. “They have already spent six months behind bars, just because the Myanmar authorities are too thin-skinned to tolerate the mildest criticism.” The offense is punishable by up to two years in prison, and release on bail is not allowed.

Seven members of the troupe face various charges related to the case, including for “online defamation” for livestreaming their performances.

“This sentencing of Peacock Generation means that the judiciary of the country is continuing the military’s suppression of freedom of expression,” said Maung Saungkha of Athan, a Myanmar-based free speech group.

In August, another court in Yangon found a prominent filmmaker guilty of defaming the military with his postings on Facebook and sentenced him to a year in prison for allegedly threatening to cause members of the military to mutiny or neglect their duties. Filmmaker Min Htin Ko Ko Gyi, who was founder of Myanmar’s Human Dignity Film Institute and the country’s Human Rights, Human Dignity International Film Festival, has also been jailed since April.