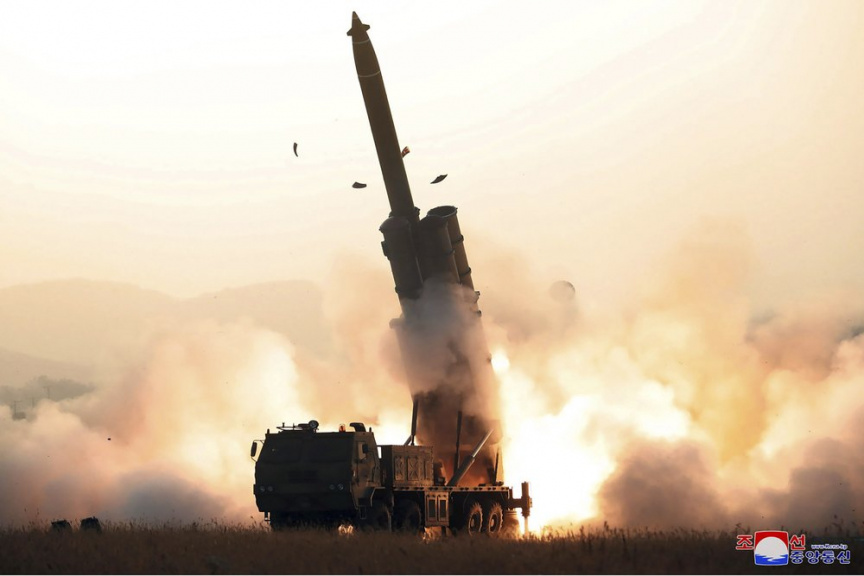 This Thursday, Oct. 31, 2019, photo provided by the North Korean government, shows what it says a test firing of a super-large rocket launcher by the Academy of Defense Science in North Korea. Independent journalists were not given access to cover the event depicted in this image distributed by the North Korean government. The content of this image is as provided and cannot be independently verified. Korean language watermark on image as provided by source reads: "KCNA" which is the abbreviation for Korean Central News Agency. (Korean Central News Agency/Korea News Service via AP)

The latest launches extended a monthslong streak of weapons displays by the North, which continues to use a standstill in nuclear negotiations to advance its military capabilities while pressuring Washington for concessions.

Pyongyang’s official Korean Central News Agency described the tests a day after the South Korean and Japanese militaries said they detected two projectiles launched from an area near the North Korean capital traveling more than 200 miles cross-country before landing in waters off the North’s eastern coast.

Experts say the North could continue to ramp up weapons demonstrations ahead of an end-of-year deadline set by leader Kim Jong Un for the U.S. to offer mutually acceptable terms to salvage a fragile diplomacy strained by disagreements over exchanging sanctions relief and disarmament steps.

Thursday’s launches followed statements of displeasure by top North Korean officials over the slow pace of nuclear negotiations with the United States and demands that the administration of President Donald Trump ease crippling sanctions and pressure on their country.

KCNA said Kim expressed satisfaction over what North Korea described as a successful test of its new rocket artillery system, but it wasn’t clear whether the leader observed the launches on site. The North previously tested the system in August and September. The latest test verified the “perfection” of the system’s continuous firing ability that allegedly allows it to “totally destroy” enemy targets with “super power,” the agency said.

Kim Eun-han, spokesman of Seoul’s Unification Ministry, said South Korea has “strong concern” over the North’s weapons activity, but avoided a straightforward answer when asked about the possible impact on inter-Korean dialogue.

Earlier this month, the North test-fired an underwater-launched ballistic missile for the first time in three years. The North has also tested new short-range ballistic missile and rocket artillery systems in recent months in what experts saw as an effort to use the standstill in talks to advance its military capabilities while increasing its bargaining power.

Negotiations have faltered after the collapse of a February summit between Kim Jong Un and Trump in Hanoi, Vietnam, where the U.S. rejected North Korean demands for broad sanctions relief in exchange for piecemeal progress toward partially surrendering its nuclear capabilities.

The North responded with intensified testing activity while Kim said he would “wait with patience until the end of the year for the United States to come up with a courageous decision.”

Washington and Pyongyang resumed working-level discussion in Sweden earlier this month, but the meeting broke down amid acrimony with the North Koreans calling the talks “sickening” and accusing the Americans of maintaining an “old stance and attitude.”