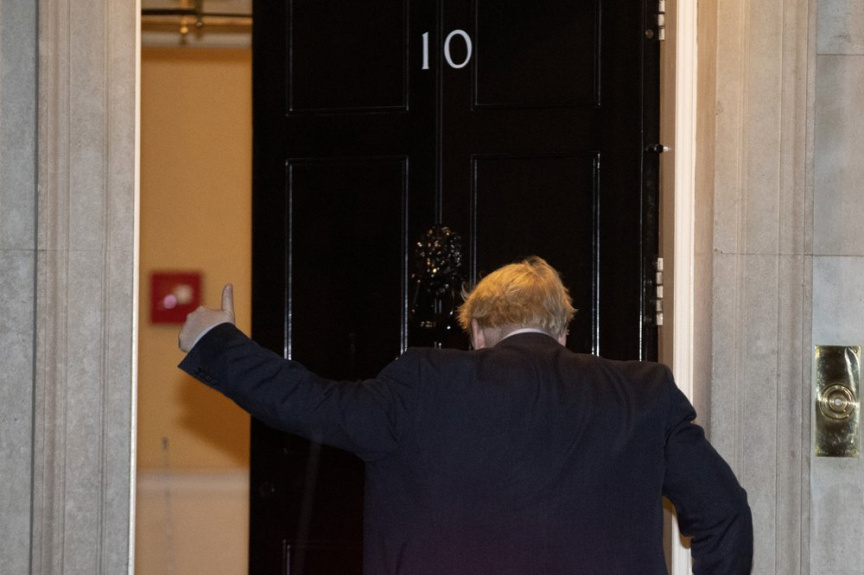 British Prime Minister Boris Johnson gives a thumbs-up as he arrives back at 10 Downing Street from the Houses of Parliament in London, Tuesday, Oct. 29, 2019. (AP Photo/Matt Dunham)

LONDON (AP) — Britons will be heading out to vote in the dark days of December after the House of Commons on Tuesday backed an early national vote that could break the country’s political impasse over Brexit — or turn out to be merely a temporary distraction.

Prime Minister Boris Johnson hopes electing a new crop of lawmakers will give his Conservative Party a majority and break the stalemate that blocked his plan to take Britain out of the European Union this month. This week the EU granted Britain a three-month Brexit extension until Jan. 31.

But after three years of inconclusive political wrangling over Brexit, British voters are weary and the results of an election are hard to predict.

The House of Commons voted 438-20 — with dozens of lawmakers abstaining — for a bill authorizing an election on Dec. 12. It will become law once it is approved Wednesday by the unelected House of Lords, which does not have the power to overrule the elected Commons.

Even before the result was announced, the political parties were in campaign mode.

Johnson — who has had to abandon his vow to lead Britain out of the EU on Oct. 31 “do or die” — accused his opponents of seeking to frustrate voters’ decision to leave the EU and prolong the Brexit process “until the 12th of never.”

“There is only one way to get Brexit done in the face of this unrelenting parliamentary obstructionism, this endless, willful, fingers crossed, ‘not me guv’ refusal to deliver on the mandate of the people — and that is to refresh this Parliament and give the people a choice,” Johnson said.

The road to polling day opened up when the main opposition Labour Party, which had opposed three previous attempts by Johnson to trigger an election, changed its position.

Now that Brexit has been delayed, Labour leader Jeremy Corbyn said his party would vote in favor of an early election because the prospect that Britain could crash out of the EU without a divorce deal had been taken off the table.

Brexit will form the unavoidable backdrop to the election, but the left-of-center Labour Party is calculating that voters will want to talk about issues such as health care, education and social welfare — all of which saw years of funding cuts by Conservative governments — more than about Brexit. The party’s position on the EU is convoluted, with a split between those who want to go through with Brexit and those who want a new referendum on whether to remain in the bloc.

The strongly pro-EU Liberal Demcorats have been eating away at Labour support in Britain’s big cities.

“The choice at this election could not be clearer,” Corbyn said in a statement that did not mention Brexit. “A Labour government will be on your side, while Boris Johnson’s Conservatives — who think they’re born to rule — will only look after the privileged few.”

The looming vote comes two and a half years before the next scheduled election, due in 2022, and will be the country’s first December election since 1923.

Lawmakers rejected an attempt by the Labour Party to hold the election on Dec. 9. The party argued the earlier date would mean more students could vote because universities would not have begun their Christmas holidays.

Earlier, a last-minute hitch to the government’s plans emerged when opposition parties announced plans to try to amend the terms of an early election to lower the voting age from 18 to 16 and expand the voting base to include citizens of the 27 other EU nations who are living in Britain.

The government said it would abandon the bill if that plan succeeded. The amendments were not chosen for a vote by parliamentary authorities, who judged that they would have fundamentally altered the legislation.

Johnson took office in July vowing to “get Brexit done” after his predecessor, Theresa May, resigned in defeat. But the Conservative leader, who said just weeks ago that he would “rather be dead in a ditch” than postpone the Oct. 31 Brexit date, was forced by Parliament to seek the extension in order to avoid a no-deal Brexit, which would damage the economies of both Britain and the EU.

Johnson plans to campaign as a leader who has a viable, strong Brexit plan for the country but who has been stymied by an anti-democratic opposition and a bureaucratic EU.

He has argued that without an early election, the British government would be like the cartoon character Charlie Brown, “endlessly running up to kick the ball only to have Parliament whisk it away.”

Theresa May called an early election in 2017 with the aim of boosting the Conservatives’ majority and strengthening her hand in negotiations with the EU. The party ended up losing its majority in Parliament, and May failed to pass her key Brexit measures.

Many voters are fed up with politicians from all sides after more than three years of Brexit drama, and all the parties are worried about a backlash from grumpy voters asked to go to the polls at the darkest, coldest time of the year.

“We all know that a poll in December is less than ideal,” said Pete Wishart, a lawmaker with the opposition Scottish National Party. “But it is worth that risk in order that we remove this prime minister.”

Meanwhile, the Brexit conundrum remains unsolved — and the clock is ticking down the new deadline of Jan. 31.

“To my British friends,” European Council President Donald Tusk tweeted Tuesday. “The EU27 has formally adopted the extension. It may be the last one. Please make the best use of this time.”