Brexit Party wants to team up with Tories; Johnson says no 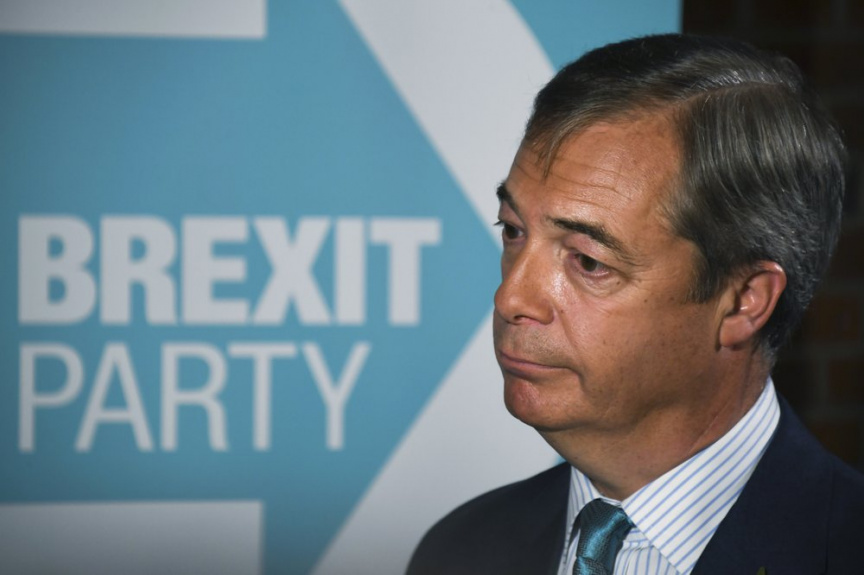 LONDON (AP) — Nigel Farage, the minor-party leader who played a major role in Britain’s decision to leave the European Union, is trying to throw his weight around again in the U.K.’s Brexit-dominated election.

Farage on Friday piled the pressure on British Prime Minister Boris Johnson, saying his Brexit Party will run against Johnson’s Conservatives across the country in the Dec. 12 early election unless Johnson abandons his divorce deal with the EU.

Farage spoke a day after U.S. President Donald Trump barged into the British election campaign, urging his friend Farage to make an electoral pact with Johnson’s Conservatives. Trump told Farage on the Euroskeptic politician’s own radio phone-in show Thursday that he and Johnson would be “an unstoppable force.”

Johnson on Friday gently rebuffed Trump’s suggestion and ruled out an electoral pact with Farage.

“If I may respectfully say to all our friends around the world ... the only way to get this thing done is to vote for us,” Johnson told ITV News. “If you vote for any other party, the risk is you’ll just get Jeremy Corbyn, the Labour Party, dither and delay.”

All 650 seats in the House of Commons are up for grabs in the election that is coming more than two years early, with winners to be chosen by Britain’s 46 million voters. If the Brexit Party runs in only a small number of seats, that would help the Conservatives, who are vying with Farage for the support of Brexit-backing voters.

Farage’s party, which was founded earlier this year, rejects Johnson’s Brexit deal, preferring to leave the bloc with no agreement on future relations in what it calls a “clean-break” Brexit. It holds seats in the European Union’s legislature but has none so far in Britain’s Parliament.

Launching the Brexit Party’s election campaign on Friday, Farage said Johnson’s deal “is not Brexit” because it would mean continuing to follow some EU rules and holding years of negotiations on future relations.

“Boris tells us this is a great new deal. It is not. It is a bad old treaty. And simply, it is not Brexit,” Farage said.

Farage, who played a key role in the 2016 campaign for Britain to leave the EU, said if Johnson agreed to abandon his deal, the Brexit Party would form a “non-aggression pact” with the Conservatives, standing aside from running against them in many areas.

“I believe the only way to solve this is to build a ‘leave’ alliance across this country,” Farage said. “If it was done, Boris Johnson would win a very big majority.”

Farage warned that if Johnson rejects the offer, “we will contest every single seat in England, Scotland and Wales.”

He said Johnson needs to make up his mind before the nominations for candidates close on Nov. 14.

On the U.K. radio show Thursday, Trump called Johnson “fantastic” but also undermined him by claiming that “certain aspects” of the prime minister’s EU divorce agreement would make it impossible for Britain to do a trade deal with the U.S.

The ability to strike new trade agreements around the world is seen by Brexit supporters as one of the key advantages of leaving the EU. Most economists, though, say trade deals with the U.S. and other countries are unlikely to compensate for Britain’s reduced commerce with the EU, which currently accounts for half of U.K. trade.

Forecasters say a no-deal Brexit would have an even more severe effect on the U.K. economy and would hurt EU nations as well.

Purist Brexiteers such as Farage dislike the Brexit agreement struck by Johnson — as they did a previous effort by his predecessor Theresa May —because it keeps the U.K. bound by EU rules and financial obligations for up to three years while a new trade relationship is negotiated. The terms would also see Northern Ireland bound by EU trade and customs rules indefinitely to avoid checks on the border with EU member Ireland that could undermine both the regional economy and peace in Northern Ireland.

The prime minister sought this early election to break the political impasse over Britain’s stalled departure from the EU.

Johnson had promised for months that the U.K. would leave the 28-nation bloc on the scheduled date of Oct. 31 “come what may.” He struck a divorce deal with the EU last month, but Parliament blocked his plan to rush it into law in a matter of days. Amid the impasse, last week the EU granted Britain a three-month Brexit delay, setting a new Jan. 31 deadline.

While the Conservatives have a wide lead in most opinion polls, analysts say the election is unpredictable because Brexit cuts across traditional party loyalties.

The Brexit Party also poses a threat to the main opposition Labour Party in traditionally Labour-supporting post-industrial areas of Wales and northern England, which voted in 2016 to leave the EU.

On the other side of the divide, the centrist Liberal Democrats, who want to cancel Brexit, are wooing pro-EU supporters from both the Conservatives and Labour in Britain’s big cities and liberal university towns.

Left-of center Labour, which has its own internal divisions over Brexit, is trying to shift the election battleground onto more comfortable domestic terrain: the rising inequities in Britain. Labour is hoping that voters want to talk about health care, the environment and social welfare instead of holding more seemingly endless Brexit debates.

“A Nigel Farage-and-Boris Johnson coalition would be scary,” she said. “It’s the kind of Halloween monster that no one in Scotland wants to see.”