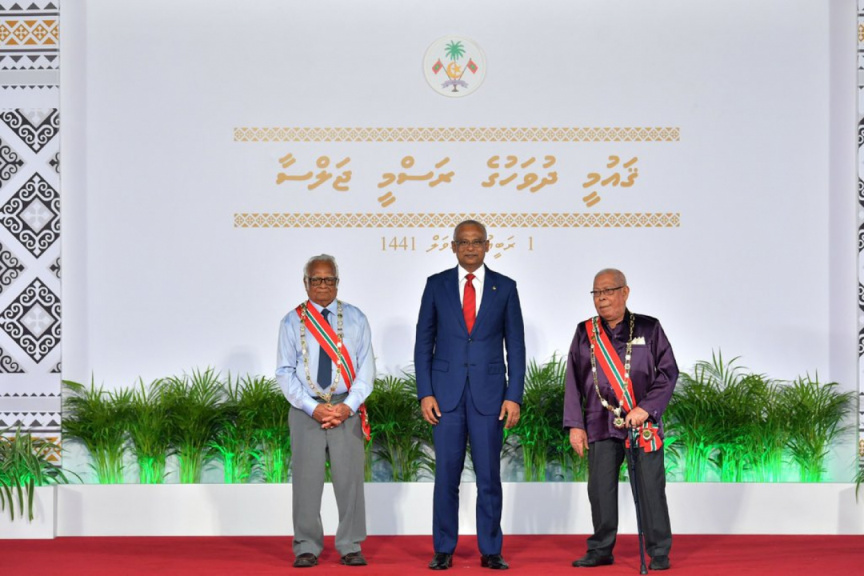 The two honorees were presented with the laurels by President Ibrahim Mohamed Solih at the official reception to mark National Day last Monday.

Born in Dh. Maaenboodhoo, Hickory Ahmed Adam obtained his education from neighboring Sri Lanka, during which time he took part in various training courses in the field of engineering.

He, after completing his education in Sri Lanka, started his service to the government on February 1, 1959, as an apprentice engineer onboard the first cargo ship the Maldivian government acquired - the Morning Star.

He obtained his higher education in the field of engineering from the UK on a scholarship awarded to him by then Maldivian Prime Minister Ibrahim Nasir.

He, upon return from the UK, began working for the Electric Department.

He had also played a pivotal role in introducing television broadcasting services to Maldives, and had served as the first manager of the second tourist resort opened in Maldives – the Bandos Island Resort.

He has also made remarkable contributions to developing electricity services, television broadcasting services, boatbuilding, mechanization of boats, and promoting technical training through the establishment of the Vocational Training Centre, and introduction and development of the tourism sector – which is now the country’s backbone.

Abdulla Sodiq (Soadhube), who is now 84 years of age, is a renowned Maldivian litterateur.

Soadhube displayed a keen interest for literature and linguistics from childhood, having begun writing poems at the tender age of 8 years.

He began is service to the government on May 29, 1952 as a clerk at a printing press.

He continues to contribute his services as a consultant for the Dhivehi Bahuge Academy.

In addition to his contributions to the fields of literature, linguistics and education, he has also released numerous works of literature including stories, poems, lyrics, and Urdu to Dhivehi translations.

He has also published numerous literacy works on the usage guidelines of the Dhivehi Language, and is noted for his contributions in the field of historical research, teaching and tutoring.

He served the longest at the then Centre for Linguistic and Historical Research- where he has been in service of for the past 30 years.

He is also a recipient of the Diamond Pen of Honor in the field of journalism.