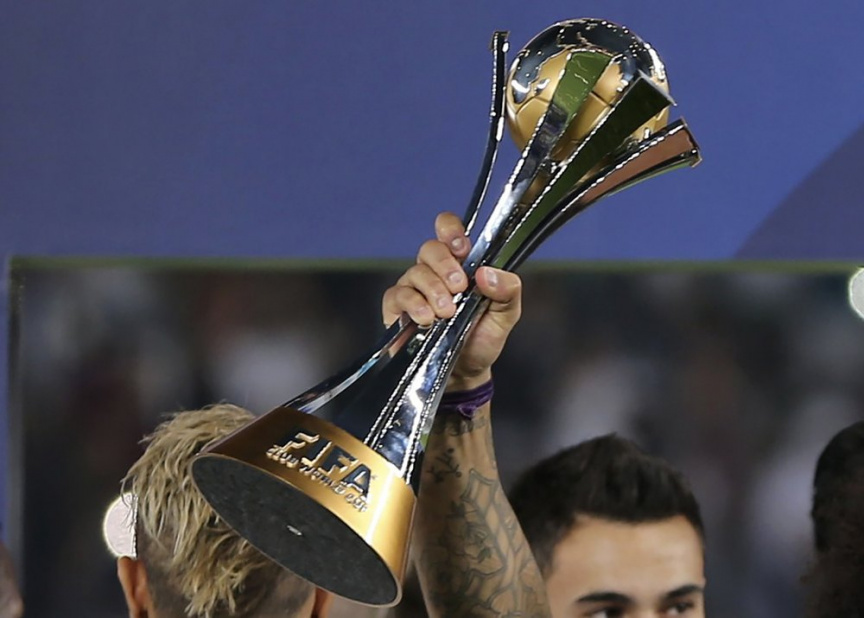 FILE - In this file photo dated Saturday, Dec. 22, 2018, Real Madrid's Marcelo holds the trophy after winning the Club World Cup final soccer match against Al Ain at Zayed Sport City in Abu Dhabi, United Arab Emirates. FIFA selected China as host of the inaugural edition of the expanded Club World Cup to be played in 2021, it is announced Thursday Oct. 24, 2019, but delayed a decision on how the 24 slots for the tournament will be distributed. (AP Photo/Kamran Jebreili, FILE)

“We have a social responsibility due to the magnitude and the power that football brings with it,” Infantino said after the FIFA Council decision in Shanghai on Thursday. “But we don’t do that by attacking, criticizing anyone.”

Amnesty International is concerned China will use the Club World Cup to attempt to present an image of openness and tolerance while abuses persist throughout the country, leaders of the organization said.

When asked at a news conference about a litany of rights violations in China, Infantino acknowledged issues in countries from Chile to Iran without directly addressing China, where there has been a crackdown on pro-democracy activism in Hong Kong this year. President Xi Jinping’s government has also faced criticism over its treatment of Muslims in China’s northwest, where the U.S. government, activists and researchers say as many as 1 million people have been detained.

“Countries all over the world are going through difficult times,” Infantino said. “It is not the mission of FIFA to solve the problems of the world.”

But FIFA introduced a human rights policy in 2017, in the second year of Infantino’s presidency, that is used to assess the suitability of event hosts.

The policy was conceived after living and working conditions for the migrant population in 2022 World Cup host nation Qatar were censured by rights groups, including Amnesty. That organization is now ratcheting up the pressure on FIFA after China was an uncontested selection to host the first Club World Cup after it expands from an annual seven-team event into a quadrennial competition with 24 participants from June-July 2021.

“Where the national context risks undermining FIFA’s ability to ensure respect for internationally recognized human rights,” reads the policy from soccer’s global governing body, “FIFA will constructively engage with the relevant authorities and other stakeholders and make every effort to uphold its international human rights responsibilities.”

Being staged a year before Beijing hosts the 2022 Winter Olympics, the Club World Cup gives China “yet another opportunity to try to ‘sportswash’ its tarnished international reputation,” said Allan Hogarth, head of policy and government affairs at Amnesty International in Britain.

“It’s likely the Chinese authorities will see the competition as an opportunity to project an image of openness and toleration,” Hogarth said, “whereas the much darker reality in the country is one of pervasive censorship, relentless round-ups of dissidents, and the shocking mass detention of Uyghurs in Xinjiang.”

Infantino is reticent to agitate the Chinese hosts. The long relationship between the NBA and China was significantly strained earlier this month when Houston Rockets general manager Daryl Morey’s tweeted in support of anti-government protesters in Hong Kong.

FIFA, which is already sponsored by Chinese conglomerate Wanda, is locked in with the country’s government and soccer federation in trying to raise revenue for the Club World Cup.

“I hope China will help FIFA to organize it in financial terms,” Infantino said. “It will be the club football event which will generate the highest revenue per match.”

Also, the FIFA Council could not settle on the distribution of slots in the tournament, which is due to start with eight groups, each featuring three teams.

A vote on the participation model was pulled because Oceania’s only way of qualification would have forced its Champions League winner to beat the domestic champion of host nation China in a playoff.

Oceania is pushing for a guaranteed spot in the tournament, as a FIFA task force originally proposed in March. That is according to people with knowledge of the situation who spoke on condition of anonymity with The Associated Press to discuss the contents of a private meeting.

FIFA only said the qualification process would be finalized after consultation with all confederations.

Here is a look at what FIFA proposed to council members ahead of the meeting, based on a document seen by the AP.

The Champions League and Europa League winners from 2018 to 2021 are set to qualify — although that could be dependent on UEFA determining the maximum number of slots per country.

Should a team enjoy multiple wins across tournaments, the free slot is due to go to the most recent Champions League runner-up to complete a six-team European lineup.

While South America has been lined up to get six slots, only the process for distributing four of them has been settled. They would go to the 2019 and 2020 winners of CONEMBOL’s two competitions: The Copa Libertadores and Copa Sudamericana.

FIFA and CONEMBOL has yet to determine the route for securing the remaining two berths or the limits on national representation.

The three Asian places would go to the winners of the 2019 and 2020 Asian Champions League and the runners-up will have a playoff for the third entry.

Saudi Arabian side Al-Hilal will play Urawa Red Diamonds of Japan in this season’s final next month. If the title is defended in 2020, the runners-up from both years will complete Asia’s FIFA lineup.

But Asia only wants a maximum of two teams from one country. So, if the winners and runners-up in 2019 and 2020 are all from the same country, the two losing 2020 Champions League semifinalists would contest a playoff.

The 2021 CONCACAF Champions League finalists will get a trip to China but there is no process yet for landing the third qualification slot within a two team per country limit.

Africa’s places would go to the 2021 Champions League finalists and the winner of a playoff between the two semifinalists would qualify if not from the same country as the finalists.

Ibrahimovic gives no clues about future