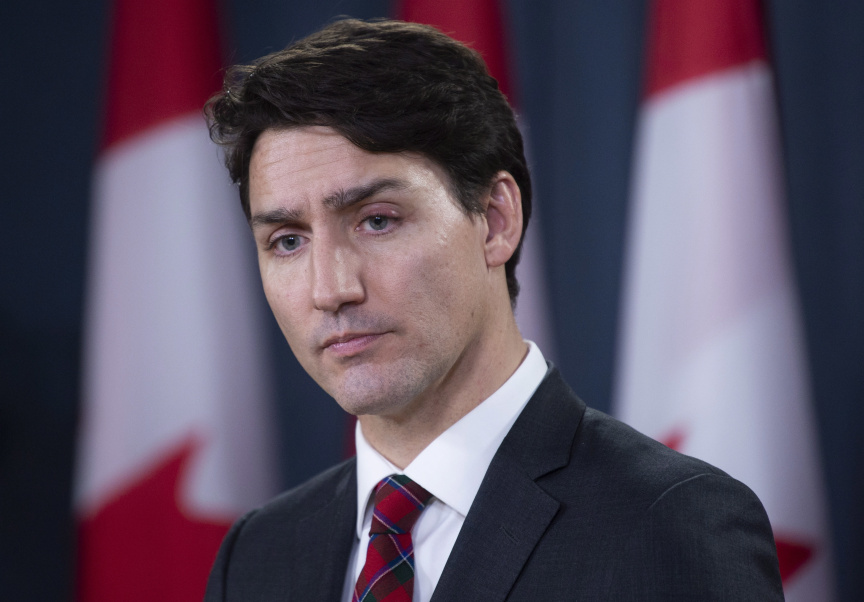 Trudeau was re-elected in a stronger-than-expected showing in Monday’s national elections. But while his Liberal Party took the most seats in Parliament, it lost its majority and will have to rely on an opposition party to get anything passed.

The prime minister struck a conciliatory note in an early morning address that forced the TV networks to break away from covering his Conservative rival, Andrew Scheer, who had just begun speaking to his own supporters.

“To those who did not vote for us, know that we will work every single day for you, we will govern for everyone,” Trudeau said.

With results still trickling in, the Liberals had 157 seats — 13 short of the 170 needed for a majority in the 338-seat House of Commons — while the Conservatives had 121.

While Trudeau claimed a “clear mandate,” his party won fewer raw votes nationally than the Conservatives did, and failed to win a single seat in the western provinces of Alberta and Saskatchewan, where the Conservatives dominated.

There is growing outrage in Alberta, home to the third-largest oil reserves in the world, over Trudeau’s inability to get a pipeline built to the Pacific Coast.

“To Canadians in Alberta and Saskatchewan,” he said after his victory, “know that you are an essential part of our great country. I have heard your frustration, and I want to be there to support you. Let us all work hard to bring our country together.”

At the same time, Trudeau said Canadians elected a government that will fight climate change. That means he will keep a national carbon tax in place that has also angered western Canada.

In what was supposed to be a concession speech, Scheer said the results showed Trudeau was much weakened since his 2015 election, when pundits had predicted the beginning of another Trudeau dynasty. Trudeau’s father, Pierre, was prime minister from 1968 to 1984, apart from a brief interruption in 1979-80.

“Conservatives have put Justin Trudeau on notice,” Scheer said. “And Mr. Trudeau, when your government falls, Conservatives will be ready, and we will win.”

Later, at a news conference, Scheer blamed Trudeau for division in the country, accusing him of pitting region against region.

“We have a divided country. It is essential for Justin Trudeau to take this seriously, to try to find common ground and stop attacking the energy sector,” Scheer said. He said he will continue as Conservative leader.

Canada was also further divided by the electoral success of the separatist Bloc Quebecois in the French-speaking province of Quebec. The Bloc won 32 of the province’s 78 districts, up from 10.

The party, however, didn’t talk about separatism during the campaign and is not expected to seek a referendum on independence from Canada.

Trudeau, 47, prevailed after a series of scandals that tarnished his image as a liberal icon.

Old photos of him in blackface and brownface surfaced last month, and Trudeau was also accused of bullying his female attorney general into dropping the prosecution of a Canadian engineering company.

Also, environmentalists have accused him of betrayal for spending billions to buy the pipeline in a so-far unsuccessful bid to get the stalled project moving again. It has been held up by environmental opposition and court challenges.

“I’m surprised at how well Trudeau has done,” Nelson Wiseman, a political science professor at the University of Toronto, said of the election results. “I don’t think anybody expected Trudeau to get a majority, but they are not that far off.”

Trudeau’s Liberals are likely to rely on the New Democrats to form a new government. That will further alienate Western Canada because New Democrat leader Jagmeet Singh is against the pipeline project

“If the frustration and alienation continue to mount it will pose a very serious challenge to national unity,” Alberta Premier Jason Kenney warned. “I’m not going to let Justin Trudeau push me out of my country.”

“The people in a lot of ways share so many values,” Singh said.