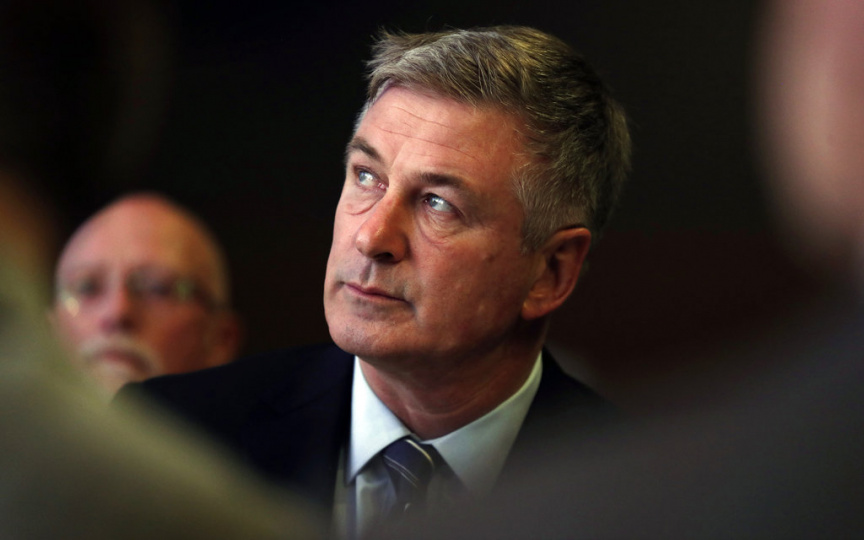 FILE - In this Nov. 27, 2017 file photo, actor Alec Baldwin waits to speak during the Iowa Democratic Party's Fall Gala, in Des Moines, Iowa. Baldwin has been arrested for allegedly punching someone during a dispute over a New York City parking spot. Police say the actor was taken into custody just before 2 p.m. on Friday, Nov. 2, 2018, in Manhattan's West Village neighborhood.(AP Photo/Charlie Neibergall, File)

MIDLOTHIAN, Va. (AP) — The actor known for his mocking impersonations of Republican President Donald Trump on “Saturday Night Live” campaigned Tuesday for Democratic legislative candidates in a Virginia election that is viewed as a warmup to the 2020 presidential contest.

Alec Baldwin told Democrats and reporters in suburban Richmond that he believes flipping the Republican-controlled House of Delegates and Senate would benefit residents of Virginia and improve the chances of the state ratifying the Equal Rights Amendment.

“If they take both houses here, if they go blue, then you have the opportunity to be the 38th state, which would then leverage the passage of the Equal Rights Amendment, which is something that I’ve always been fairly obsessed about,” he said.

Passed by Congress in 1972, the Equal Rights Amendment would ban discrimination on the basis of sex, explicitly enshrining equality for women in the U.S. Constitution. Thirty-seven states have ratified it and advocates say having 38 would meet the constitutional threshold for approval, though it would also likely spark court battles over a long-passed ratification deadline and other legal questions.

Baldwin’s first stop in Virginia was in a suburban Richmond neighborhood where he campaigned with Amanda Pohl, a Democrat looking to unseat incumbent Republican state Sen. Amanda Chase.

The Emmy winner and former “30 Rock” star began by knocking on doors, followed by a small army of reporters.

The progressive advocacy group People for the American Way helped organize the trip. Baldwin is a board member and has been an outspoken critic of Trump.

Sarah Robinson, who answered the door when Baldwin knocked, said she’s planning to vote for Virginia Democrats to signal her disapproval of the president and his administration.

Virginia is one of only four states holding legislative elections this year and the only one where partisan control of the legislature is up for grabs.

The district Baldwin visited leans Republican, but Democrats are bullish on their chances of unseating Chase. She’s an outspoken conservative who often feuds with members of her own party and sometimes wears a sidearm at the Capitol. Earlier this year she issued an apology after she berated a Capitol Police officer over a parking space.

Chase mocked Baldwin’s visit, noting his history of public confrontation and legal problems, and called Pohl a hypocrite for campaigning with him.

Baldwin told the crowd he’d learned that Chase had “attacked” him and poked fun at her.

“And then I heard about what happened to her,” he said, to laughs and applause from Pohl supporters.

Baldwin pleaded guilty earlier this year to harassing a man during a dispute over a parking spot.

The Richmond Times-Dispatch reported that Chase held up traffic and used profane language when she was denied access to a secure parking area near the Capitol.

Baldwin said he had a gift for Chase: a roll of quarters “so when she loses this job she can go and find all the parking spaces she needs.”

Pohl and Baldwin knocked on voters’ doors near Chase’s house. Before he left, Baldwin joked about leaving the quarters in her mailbox but was persuaded by aides not to do so.