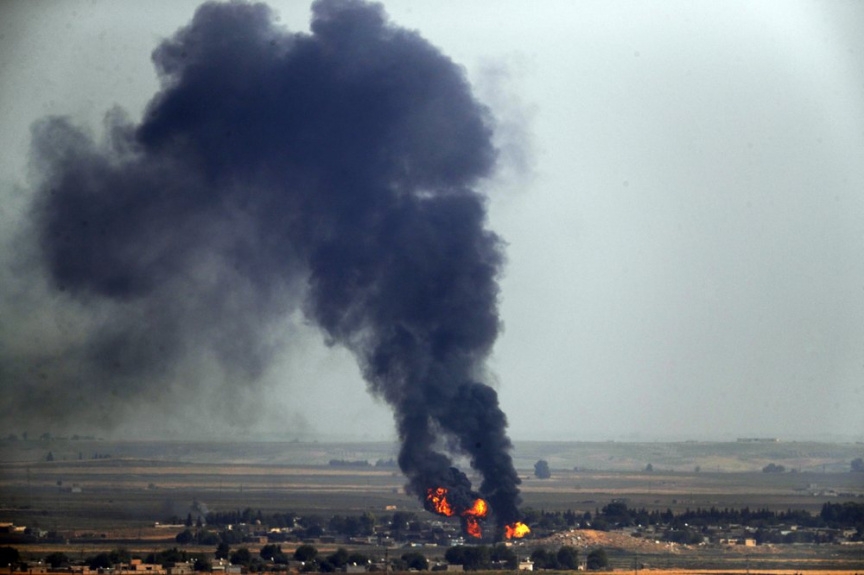 In this photo taken from the Turkish side of the border between Turkey and Syria, in Ceylanpinar, Sanliurfa province, southeastern Turkey, flames and smoke billow from a fire on a target in Ras al-Ayn, Syria, caused by shelling by Turkish forces, Thursday, Oct. 17, 2019. U.S. Vice President Mike Pence and State Secretary Mike Pompeo were scheduled to arrive in Ankara Thursday and press Turkey's President Recep Tayyip Erdogan to accept a ceasefire in northeast Syria. (AP Photo/Cavit Ozgul)

ANKARA, Turkey (AP) — The U.S. and Turkey agreed Thursday to a cease-fire in the Turks’ deadly attacks on Kurdish fighters in northern Syria, requiring the Kurds to vacate the area in an arrangement that largely solidifies Turkey’s position and aims in the weeklong conflict. The deal includes a conditional halt to American economic sanctions.

After negotiations with Turkish President Recep Tayyip Erdogan, U.S. Vice President Mike Pence hailed the five-day cease-fire as the way to end the bloodshed caused by Turkey’s invasion. He remained silent on whether it amounted to a second abandonment of America’s former Kurdish allies in the fight against the Islamic State group.

Turkish troops and Turkish-backed Syrian fighters launched their offensive against Kurdish forces in northern Syria a week ago, two days after President Donald Trump suddenly announced he was withdrawing the U.S. military from the area. Trump was widely criticized for turning on the Kurds, who had taken heavy casualties as partners with the U.S. in fighting IS extremists since 2016.

Turkish Foreign Minister Mevlut Cavusoglu said the United States had accepted the idea of a “safe zone” long pushed by Turkey, and he insisted Turkish armed forces will control the zone. He also made clear that Turkey will not stop at a previously limited zone; he said Turkish control of the Syrian side of the border must extend all the way to the Iraqi border.

The commander of Kurdish-led forces in Syria, Mazloum Abdi, told Kurdish TV, “We will do whatever we can for the success of the cease-fire agreement.” But one Kurdish official, Razan Hiddo, declared that Kurdish people would refuse to live under Turkish occupation.

Trump had no reservations, hailing “a great day for civilization.”

Trump seemed to endorse the Turkish aim of ridding the Syrian side of the border of the Kurdish fighters whom Turkey deems to be terrorists but who fought against IS on behalf of the U.S. “They had to have it cleaned out,” he said.

Sen. Mitt Romney, the Republicans’ presidential nominee in 2012, said he welcomed the cease-fire but wanted to know what America’s role in the region would be and why Turkey was facing no consequences for its invasion.

“Further, the cease-fire does not change the fact that America has abandoned an ally,” he said on the Senate floor.

It was not clear whether the deal means the U.S. military will play a role in enabling or enforcing the cease-fire. Pence said the U.S. would “facilitate” the Kurds’ pullout, but he did not say if that would include the use of American troops.

As Pence was speaking in Ankara, U.S. troops were continuing to board aircraft leaving northern Syria. Officials said a couple of hundred had already departed, with hundreds more consolidated at a few bases waiting to move out.

Sen. Lindsey Graham, a Trump confidant who has criticized the president’s pullout, said he thinks U.S. troops will be needed as part of an effort to implement and enforce a halt to the fighting. “There’s just no way around it,” he said. “We need to maintain control of the skies” and work with the Kurds.

While the cease-fire seemed likely to temporarily slow legislation in Congress aimed at punishing Turkey and condemning Trump’s U.S. troop withdrawal, lawmakers gave no sign of completely dropping the measures.

Shortly before the announcement of the pause in hostilities, Graham and Sen. Chris Van Hollen, D-Md., introduced legislation that would bar U.S. military aid to Turkey, seek to curb foreign arms sales to Ankara and impose sanctions on top Turkish officials unless Turkey withdraws its forces. Those sanctions would include a report on Erdogan’s family assets.

In contrast with Pence’s description of a limited safe zone, the agreement would effectively create a zone of control patrolled by the Turkish military that Ankara wants to stretch for the entire border from the Euphrates River to the Iraqi border, though the agreement did not define the extent of the zone. Turkish forces currently control about a quarter of that length, captured in the past nine days.

The rest is held by the Kurdish-led forces or by the Syrian government military, backed by Russia, which the Kurds invited to move in to shield them from the Turks. None of those parties has much reason to let Turkish forces into the areas.

Ankara has long argued the Kurdish fighters are nothing more than an extension of the Kurdistan Workers Party, or PKK, which has waged a guerrilla campaign inside Turkey since the 1980s and which Turkey, as well as the U.S. and European Union, designate as a terrorist organization.

In fact, Turkey’s foreign minister rejected the term “cease-fire,” saying that would be possible only with a legitimate second party. He suggested a “pause” in fighting instead.

Pence and Secretary of State Mike Pompeo, who took part in the negotiations, lauded the deal. A senior administration official said the American team sensed a breakthrough, after listening to Erdogan repeatedly reject a ceasefire, when the Turkish president finally asked how long it would take to get the Kurdish fighters out of the so-called safe zone. The official, who spoke on condition of anonymity to describe internal deliberations, said the U.S. was in touch with the Kurds throughout the negotiations, including about the speed of the withdrawal and the need for a halt in Kurdish long-range artillery fire into Turkey.

But the agreement essentially gives the Turks what they had sought to achieve with their military operation in the first place. After the Kurdish forces are cleared from the safe zone, Turkey has committed to a permanent cease-fire but is under no obligation to withdraw its troops. In addition, the deal gives Turkey relief from sanctions the administration had imposed and threatened to increase, meaning there will be no penalty for the operation.

Brett McGurk, the former civilian head of the administration’s U.S.-led counter-IS campaign, wrote on Twitter that Thursday’s deal was a gift to the Turks.

“The US just ratified Turkey’s plan to effectively extend its border 30km into Syria with no ability to meaningfully influence facts on the ground,” he wrote, adding that the arrangement was “non-implementable.”

Danielle Pletka, vice president for foreign and defense policy studies at the American Enterprise Institute, tweeted, “This is a respite while we surrender to Turkish domination of Northeast Syria.”

Erdogan had stated on Wednesday that he would be undeterred by U.S. sanctions. He said the fighting would end only if Kurdish fighters abandoned their weapons and retreated from positions near the Turkish border.

Before the talks, the Kurds indicated they would object to any agreement along the lines of what was announced by Pence. But Pence maintained that the U.S. had obtained “repeated assurances from them that they’ll be moving out.”

Trump’s withdrawal of U.S. troops has been widely condemned, including by Republican officials not directly associated with his administration. Republicans and Democrats in the House, bitterly divided over the Trump impeachment inquiry, banded together Wednesday for an overwhelming 354-60 denunciation of the U.S. troop withdrawal.

Trump has denied that his action provided a “green light” for Turkey to move against the longtime U.S. battlefield partners or that he was opening the way for a revival of the Islamic State group, new Russian influence in the region and increased worldwide doubts about U.S. faithfulness to its allies.

The White House released a letter on Wednesday in which Trump warned Erdogan that the sanctions could destroy his economy and that the world “will look upon you forever as the devil if good things don’t happen. Don’t be a tough guy. Don’t be a fool!”

While Erdogan, too, heard global condemnation for his invasion, he also faced renewed nationalistic fervor at home, and any pathway to de-escalation likely needed to avoid embarrassing him domestically.