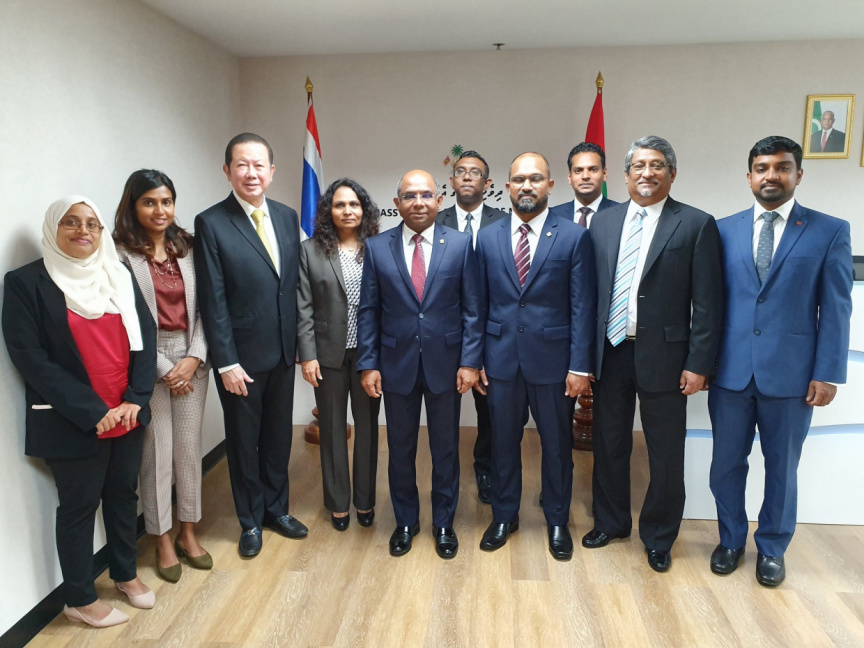 Foreign Minister Abdulla Shahid (C) at the official reception to mark the opening of the Maldivian Embassy in Bangkok on October 16, 2019. (Photo/Foreign Ministry)

The Maldivian Embassy in Bangkok, the capital of Thailand, has been officially opened by Maldivian Foreign Minister Abdulla Shahid.

It is located in the Bang Rak district of Bangkok.

Shahid, who is in Bangkok on a three-day official visit to celebrate the 40th anniversary of diplomatic relations between Maldives and Thailand, hosted the official reception to mark the opening of the Embassy this Wednesday.

The reception was also attended by Maldivian Ambassador to Thailand, Mohamed Jinah, Deputy Ambassador Hudha Ali Shareef and other high-ranking officials from the Foreign Ministry and the Embassy.

Foreign Ministry has hailed the opening of the Embassy as “a new chapter in the bilateral relations between the two countries, especially in facilitating better services for Maldivians visiting Thailand.”

According to the Foreign Ministry, the Embassy will promote Maldives’ socio-economic and commercial interests, export of Maldivian products and services, and assist business operators, workers and investors from both Maldives and Thailand.

Shahid, who travelled to Bangkok for an official visit at the invitation of his Thai counterpart Don Pramudwinai on Tuesday, is scheduled for bilateral talks with Pramudwinai regarding strengthening and further expanding the bilateral cooperation between Maldives and Thailand.

He will conclude his visit and return back to Maldives on Thursday.

Mugging suspect found to be in possession of drugs