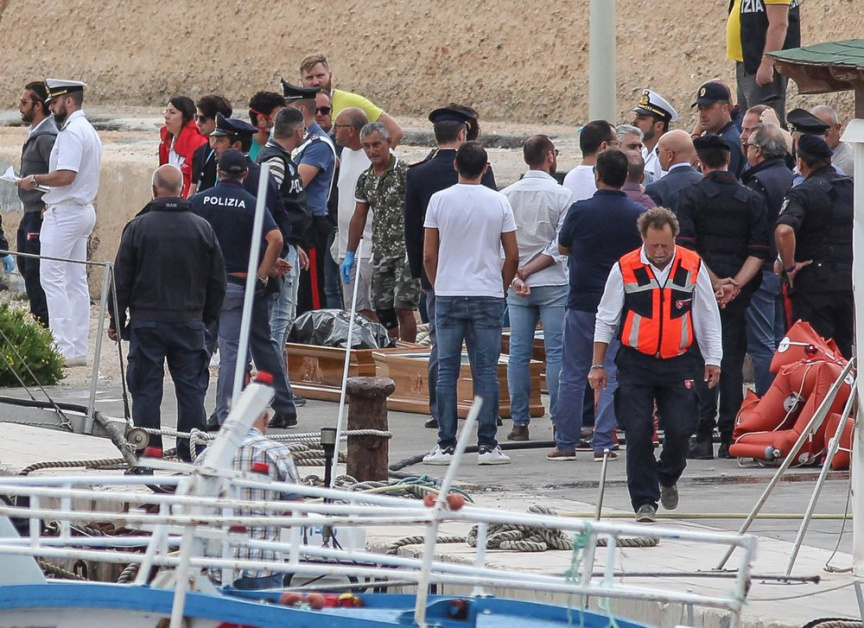 Coffins are prepared on the dock of the tiny island of Lampedusa, Sicily, in southern Italy, Monday, Oct. 7, 2019. (Pasquale Claudio Montana Lampo/ANSA via AP)

MILAN (AP) — The deaths of at least 13 people early Monday on an overloaded migrant boat that capsized near the Italian island of Lampedusa have galvanized calls to shut down smuggler routes and revamp search-and-rescue efforts in the deadly central Mediterranean Sea.

The Italian coast guard said one of its vessels was about to begin the rescue about six nautical miles Italy’s southernmost island when the boat capsized. Survivors told the U.N. refugee agency that the migrants moved to one side of their unseaworthy vessel when they saw the rescue ship, capsizing it.

Twenty-two people were plucked from the sea and brought to safety. But 13, all women, were pulled dead from the water, and the search was continuing for 15 still missing, including an unknown number of children.

The boat had departed Tunisia, with about 50 people on board, mostly west Africans and Tunisians.

The incident brings to more than 1,000 the number of people who have died in the Mediterranean Sea this year.

“Enough massacres in the sea,” Lampedusa Mayor Toto Martello said. “We cannot continue to watch bodies being unloaded of poor people who are following a dream to better their lives. Politicians must react.”

The latest deadly shipwreck comes six years after the Oct. 3, 2013 disaster that killed more than 360 people, a tragedy that prompted Italy to increase its patrols of the deadly crossing from Libya.

But that operation, dubbed Sophia, is now limited to aerial searches to identify smugglers’ boats in need of rescue.

The U.N. refugee agency said that Monday’s deadly shipwreck “highlights once again that urgent action is needed to address the situation on the Mediterranean.” It called for the European Union to resume its search and rescue operation in the Mediterranean Sea, especially along the dangerous route from Libya.

UNHCR spokesman Charlie Yaxley in Geneva also said the agency was calling for “greater efforts to tackle the smugglers who prey on people. At the moment they are able to act with impunity.”

The International Organization for Migrants said that 688 have died along that route so far this year, compared with 1,261 in the same period last year. The total deaths at sea in the Mediterranean were 1,071 through Monday, below the 1,890 on the same date in 2018.

In the absence of an EU search and rescue operation, the job of patrolling the Mediterranean has largely been left to humanitarian rescue ships.

But there are fewer of those than a year ago because of sanctions they face under measures adopted when hard-liner Matteo Salvini was interior minister. And once a rescue has been carried out, both Italy and Malta have closed their ports to the NGO ships, leading to days or weeks of haggling with the EU to find a safe harbor.

One of those, Spanish NGO Open Arms, said Monday it rescued 44 people, including one toddler and a months-old baby, on a wooden boat trying to reach European shores.

Canals said that Malta’s rescue coordination center told the group not to offer the migrants any assistance, saying that Italy would probably send a patrol boat from Lampedusa, about an hour away. But Open Arms decided to rescue them anyway after waiting five hours because the boat wouldn’t have made it to land without fuel and faced adverse weather.

“The surprise was to hear Malta’s instructions -- who told us to let them continue to sail. We are evidently talking about a vessel in distress, an overcrowded boat without any type of guarantee that it can reach anywhere, and evidently without enough fuel to reach the island of Lampedusa,” Open Arms Founder Oscar Camps told a news conference near Barcelona.

Camps said that had the Open Arms been cleared to rescue the 44 earlier -- instead of waiting five hours -- the ship could have been available to sail to Lampedusa and aid in that rescue -- perhaps saving lives. But he said they were not called in any case, an indication of authorities’ reluctance to coordinate with them.

“Once again we denounce that these boats are in distress. They are by themselves, vessels in danger, because of the dimensions, the overweight (overcrowded) and the lack of navigation capacity and little security guarantees they can offer,” Camps said. “They must be intervened immediately they cannot be left to their own luck.”