Taliban say Afghanistan has freed several of their prisoners 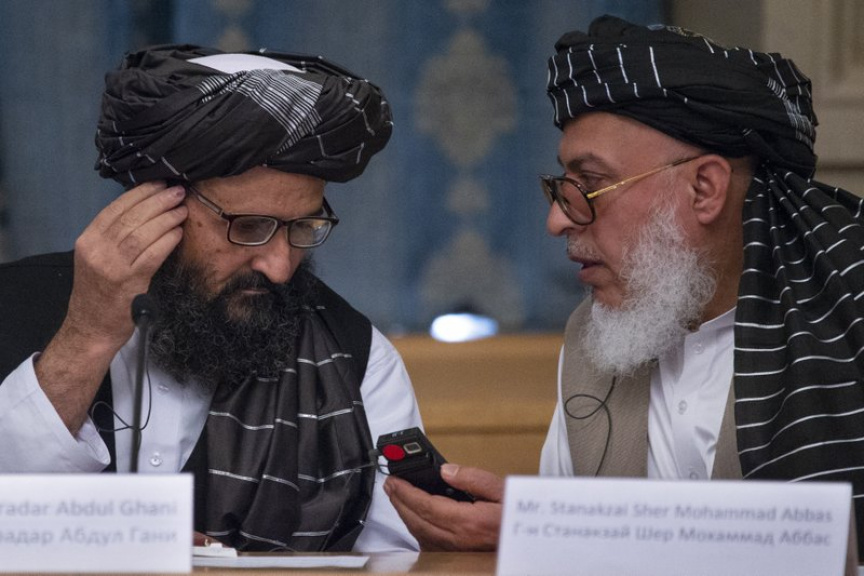 In this May 28, 2019, file photo, Mullah Abdul Ghani Baradar, the Taliban group's top political leader, left, and Sher Mohammad Abbas Stanikzai, the Taliban's chief negotiator, talk to each other during a meeting in Moscow, Russia. (AP Photo/Alexander Zemlianichenko, File)

The Taliban also said they released three Indian engineers they had been holding, though that has yet to be confirmed by New Delhi or the Afghan government.

The Taliban officials spoke Sunday on condition of anonymity because they were not cleared by their leadership to speak to the media.

The Taliban have established a shadow government in areas they control across Afghanistan and have even set up courts to try offenders and abide by their strict interpretation of Islamic law, or Sharia.

The Taliban were reportedly released from one of Afghanistan’s largest jails at the Bagram military base, north of the capital, Kabul. While the U.S. troops years ago handed over the sprawling base to Afghan security forces, it still maintains a military presence at Bagram. It wasn’t clear whether the U.S. or Afghan forces released the Taliban.

The Associated Press contacted both Afghanistan’s defense department and the president’s office, but they declined to comment.

However, an Afghan government official said 11 Taliban were released in exchange for the three Indian engineers. He said it was not linked to the visit by the Taliban or U.S. peace envoy Zalmay Khalilzad’s visit to Pakistan. The official declined to be identified by name and would not elaborate on the reason for anonymity.

Khalilzad met last week in Islamabad with the Taliban’s top negotiator Mullah Abdul Ghani Baradar, a co-founder of the hard-line Taliban movement and head of a Taliban delegation to the Pakistani capital. The Taliban said they were in Islamabad to discuss the condition of roughly 1.5 million Afghan refugees living in the city.

U.S. officials said Khalilzad was in the Pakistani capital to follow up on talks he held in September in New York with Pakistani officials, including Prime Minister Imran Khan.

The U.S. insisted Khalilzad was not in Pakistan to restart U.S.-Taliban peace talks __ at least not yet. But the Taliban and Pakistan confirmed the two sides met.

The meeting is significant and the first Khalilzad has held with the Taliban since last month, when President Donald Trump declared that the talks were “dead,” blaming an uptick in violence by the Taliban that included the killing of a U.S. soldier.

Still, Trump says he wants to exit Afghanistan, ending America’s longest war, and withdraw 14,000 troops from there. He has criticized the Afghan government for not doing more to defend Afghanistan and relying on U.S. and NATO troops to police the country.

While few details of Khalilzad’s meeting with the Taliban have emerged, there have been reports that the two sides did discuss prisoner exchanges, with the freedom for two professors __ an American and an Australian __of the American University in the Afghan capital featuring in the discussions.

American professor Kevin King, and Australian, Timothy Weeks were kidnapped in Kabul in August 2016. The Taliban have released videos of the two men and have said their conditions have deteriorated.

“You have a golden opportunity and if it is missed, then who knows when it comes back again,” Qureshi said he told Baradar, the chief Taliban negotiator, during their meeting in Islamabad.

From Islamabad, the Taliban delegation returned on Sunday to Qatar, a Gulf Arab country where the insurgents maintain a political office.

“I told the Taliban to take a step for peace, and I feel that we are heading toward achieving peace” in Afghanistan, he said.

The U.S. and Afghanistan often accuse Pakistan of harboring the Taliban. Pakistan denies the charge and says it has been pressuring the insurgents into talks since Khalilzad’s appointment as peace envoy.