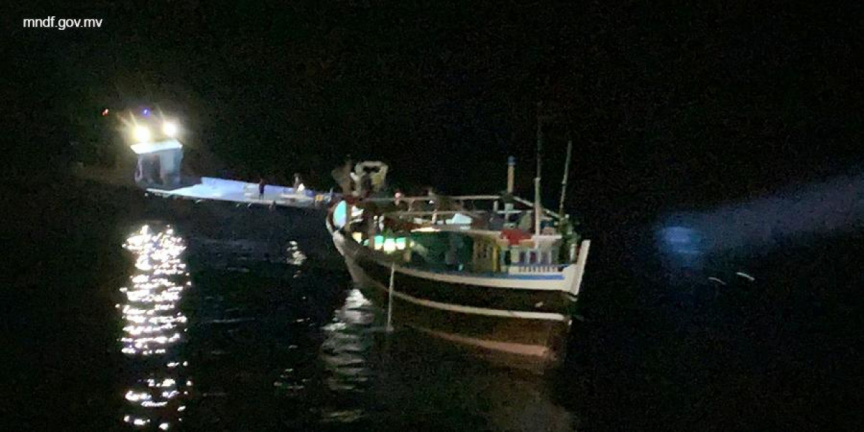 This image released by MNDF shows the Iranian flagged boat (front) captured from Maldivian territorial waters carrying drugs and the local fishing boat which went to collect the drug shipment on October 5, 2019. (Photo/MNDF)

Maldivian Coastguard says that it, in addition to seizing drugs from an international boat which entered Maldivian territorial waters this week, also intercepted a local fishing boat which went to collect the drug shipment.

The drug shipment was seized in a joint operation by the Coastguard and the police on Saturday, October 5.

The Coastguard says that it is yet to verify the origin of the international boat, though it was found bearing the Iranian flag.

The boat was intercepted from 27.5 nautical miles off the coast of H. A. Thuraakunu, from the Maldives Exclusive Economic Zone.

The agency says that it had also been alerted to a local boat which would approach the Iranian-flagged boat, and had intercepted a local fishing boat in a joint operation by the Coastguard and the police.

The Coastguard and the police are currently directing the boat toward Male’ City.

The Coastguard confirmed it found packages containing what is believed to be drugs from onboard the international boat, but did not disclose any specifics.

However, Indian newspapers report that the boat had been carrying 150 kilos of heroin, and had been captured with 6 crew members onboard.

The case is currently under investigation by the local police.