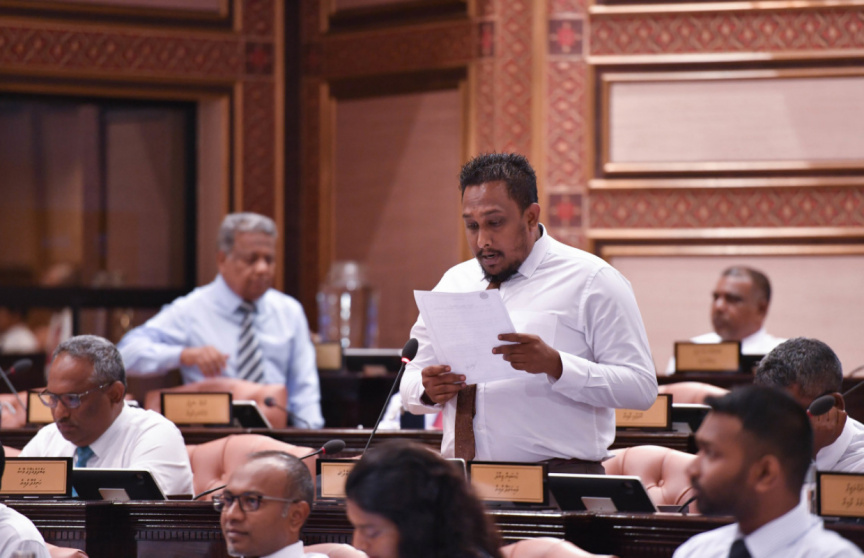 He made the comment during the debate on the emergency motion on countering islamophobia, blasphemy which he presented to the Parliament this Monday.

He filed the emergency motion in response to a report on a preliminary assessment of radicalization in Maldives written and published by local NGO Maldives Democracy Network (MDN) – which had sparked widespread outrage after some of its content was found to be blasphemous, and to mock the Islamic faith, the Holy Quran, and the Prophet.

After condemning MDN over its report, MP Nasheed proceeded to liken advocates of gender equality and women’s rights to heretics.

He said that “bookworms” must be exterminated before they become an infestation. He said that failure to do so spelled doom for Maldives.

MP Nasheed said that religious extremism posed equal threat as irreligiousness, but also suggested that those who actively promote religious freedom must be denied their Maldivian citizenship.

“The reality is, those who work against the religion must have their Maldivian citizenship revoked. Why can’t this be done? The law stipulates that a Maldivian must be a Muslim. But a person who engages in homosexuality remains a citizen. Why don’t we cast them out of this country? They can go and live freely as they wish elsewhere. There’s no need to destroy this land,” said MP Nasheed.

The lawmaker also suggested that religious extremism stemmed from inaction against the irreligious. He said that the Maldives wouldn’t have had to see this day if the authorities had taken necessary action against the people who had openly mocked Islam from the very beginning.

Referring back to MDN’s report, MP Nasheed said that the report had been a coordinated attack launched to attempt to destroy the Islamic faith in Maldives.

He also condemned the decision by MDN to name several local Islamic scholars on its report – which he said would unfairly restrict them from travelling to foreign countries as well as getting enrolled in international universities.

MP Nasheed said that it was important that investigators uncover when exactly the report had been released, but that as far as he knew, MDN had only released a 25-page report in 2015, and then the full 124-page report after the presidential election in 2018.

Holding up hardcopies of the two reports, MP Nasheed said that both were significantly different from the other.

He said that MDN had deliberately diluted the report which it had released to the public in 2015, but had sent the full version to “irreligious foreign missionaries”.

The debate on MP Nasheed’s emergency motion had resulted in tempers flaring up, and with the lawmaker exiting the chambers.