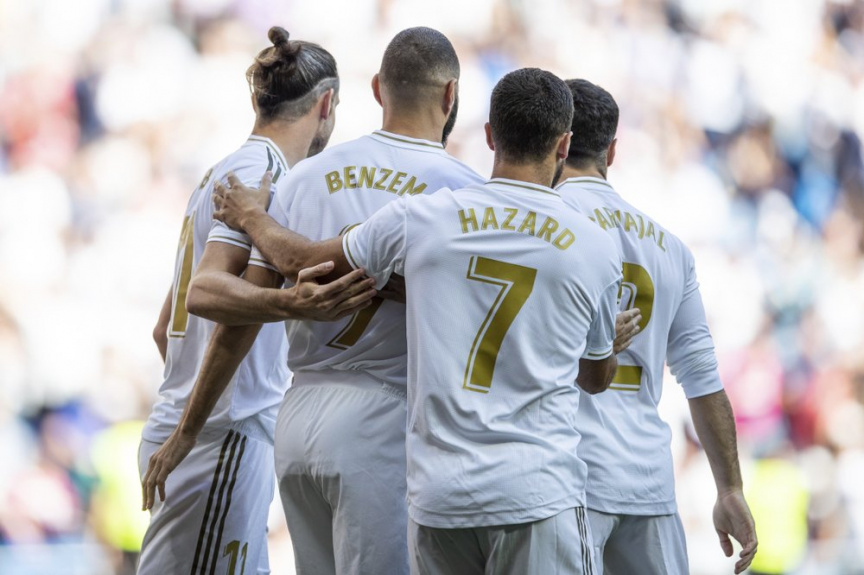 MADRID (AP) — Eden Hazard answered criticism for his poor start with Real Madrid by scoring his first league goal with the Spanish club on Saturday.

Hazard scored in a 4-2 win over Granada that helped Madrid stay at the top of the Spanish league, and allowed him to quieten critics after a series of lackluster performances since joining the club.

“We want to see Eden playing like this, playing well,” Madrid coach Zinedine Zidane said. “He was happy after the match in the changing room, and we are happy for him. We hope it was the first goal of many for him.”

Karim Benzema, Luka Modric and James Rodríguez also scored for Madrid in the win over second-place Granada, the surprising southern Spain club back in the first division after two years.

Madrid, which arrived under pressure after a 2-2 home draw against Club Brugge in the Champions League, opened a four-point lead in the Spanish league over Granada and third-place Atlético Madrid, which visits Valladolid on Sunday. Fourth-place Barcelona, five points off the lead, hosts Sevilla on Sunday.

Madrid’s top signing since the departure of Cristiano Ronaldo, Hazard scored in a breakaway in first-half stoppage time. He sent his shot over Granada goalkeeper Rui Silva as defenders closed in.

Hazard arrived amid high expectations as Madrid paid Chelsea a reported fee of 100 million euros (now $110 million) plus add-ons, making him the club’s most expensive signing ever.

The Belgium playmaker scored in a preseason friendly but missed the start of the season because of a muscle injury and was yet to impress since he returned to action. Hazard was still far from his best on Saturday, but got a loud ovation from the crowd after being replaced by Francisco “Isco” Alarcón in the 69th minute.

Benzema added to his great start to the season by opening the scoring two minutes into the match at the Santiago Bernabéu Stadium with a shot from close range after a pass by Gareth Bale. It was Benzema’s sixth goal in seven league matches.

Modric, who replaced injured Toni Kroos before halftime, gave Madrid a 3-0 lead with a booming shot from outside the area in the 61st, hitting the top corner after a pass by Hazard.

Granada started a comeback with a penalty converted by Darwin Machís in the 69th after Madrid goalkeeper Alphonse Areola lost control of the ball inside the area. The visitors pulled closer with a goal by Domingos Duarte off a corner kick in the 78th, but Madrid sealed the win in stoppage-time when substitute Rodríguez scored following a counterattack for his first goal since returning to Madrid after two seasons on loan with Bayern Munich.

“We started the match the worst possible way, but I’m proud of how the team reacted in the second half,” Granada coach Diego Martínez said. “We showed what this team is all about. We never gave up. We didn’t get the result we wanted but this match will be good for the team’s confidence in the future.”

Granada, which spent the last two seasons in the second division, was coming off its best start ever in the league, with four wins in its first seven matches. Its only loss had been against Sevilla in the second round, and it defeated two-time defending champion Barcelona 2-0 at home in the fifth round.

Madrid was coming off two consecutive draws — at Atlético Madrid in the league and against Club Brugge in the Champions League group stage.

Goalkeeper Thibaut Courtois, who was replaced at halftime against Club Brugge with what the club said was a stomach problem, couldn’t start on Saturday.

Valencia, sitting eighth, defeated Alavés 2-1 for its first home win under new coach Albert Celades. Maxi Gómez and Dani Parejo scored for Valencia in a match interrupted by a power outage in the second half. There were also protests by Valencia fans against Singaporean owner Peter Lim and president Anil Murthy, who was at Mestalla Stadium. The club later released a statement saying it had advised authorities about death threats made against Murthy through his cell phone.

Promoted Osasuna came from behind to beat Villarreal 2-1 with a 79th-minute winner by Ezequiel “Chimy” Ávila, while Levante won 2-1 at last-place Leganés, the only team yet to win a league game this season. Leganés claimed there were problems with the video review system during the match and that this stopped a penalty call against the club from being properly checked. The Spanish federation denied any problems with the VAR during the game.