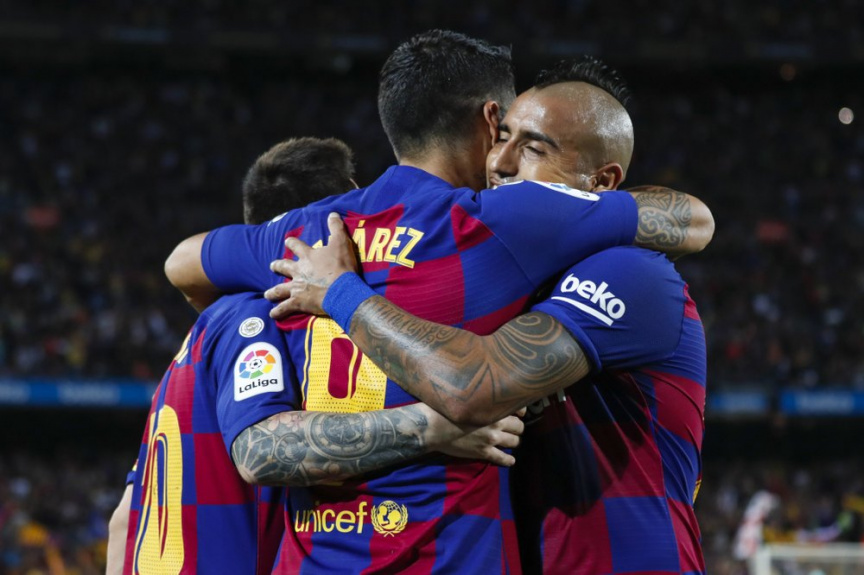 Messi curled a left-footed free kick over the wall and into the net for his first goal of the season to wrap up Barcelona’s 4-0 win over Sevilla in the Spanish league on Sunday.

The soccer great thrust his finger in the air before pumping his fist in celebration after scoring in the 78th minute. Messi had gone scoreless in his previous four appearances after being sidelined for five games with injuries.

Messi’s 37th goal in 38 career meetings with Sevilla was also his first since he won his record sixth FIFA player of the year award last month.

“We know how important Leo is for this team and what he means to us,” Barcelona midfielder Arturo Vidal said. “If he is playing well it helps us a lot.”

Luis Suárez put Barcelona on the winning path for a second time this week after netting with a bicycle kick in the 27th despite Sevilla having dominated the game before then. On Wednesday, the Uruguay striker had sparked a 2-1 comeback over Inter Milan in the Champions League with a superb volley before he added a fine second goal.

Vidal and Ousmane Dembele added two more goals against Sevilla in the next 10 minutes to turn what had been a tightly contested start into a demolition.

After a stuttering start to the season while Messi was out injured, Barcelona’s fourth straight victory in all competitions lifted it into second place and two points behind leader Real Madrid. Barcelona will host Madrid on Oct. 26.

Atlético Madrid slipped to third — one point behind Barcelona — after being held 0-0 at Valladolid, its third scoreless draw in four rounds.

“It was a complicated match and the score by halftime was a bit exaggerated,” Barcelona coach Ernesto Valverde said. “We had more firepower than they did. After scoring the first goal we created danger practically every time we reached their area.”

Barcelona finished with nine men after referee Mateu Lahoz sent off Ronald Araujo on his debut after making contact with Sevilla’s Javier “Chicharito” Hernández with only the Barcelona goalkeeper to beat. Replays showed minor contact between the two players.

Dembele was then shown a direct red, for criticizing Lahoz’s decision by saying he was “very bad.”

The last time Sevilla coach Julen Lopetegui came to Camp Nou, his Real Madrid team had been routed 5-1. He was fired a day later.

One year later, Lopetegui must have been at a loss to see his team trailing 3-0 at halftime after it had outplayed Barcelona in the first 25 minutes, largely thanks to Lucas Ocampos’ powerful runs down the right flank and on-target passes.

Sevilla’s Luuk de Jong, however, had a night to forget. After goalkeeper Marc-Andre ter Stegen made an excellent save against his point-blank shot off a pass by Ocampos, the striker had three glaring misses.

Lopetegui looked on in disbelief when De Jong’s header off another Ocampos cross failed to go in — a minute before Suárez whipped in Nelson Semedo’s cross at the other end.

De Jong’s bad fortune continued after halftime when he stole the ball to leave himself in a perfect position, only to hit the post. He has yet to score since joining Sevilla in the offseason.

“It was a painful and undeserved loss,” Lopetegui said. “We were missing our finishing touch. De Jong did a lot of things very well, just as the team did, but to win at Camp Nou you have to play well and have a bit of luck.”

Atletico coach Diego Simeone sent on Ángel Correa and Thomas Lemar for Félix and Morata, but they only slightly improved the attack. Atlético’s best scoring chance came in the 82nd when substitute Correa hit the upright.

Valladolid striker Sandor Ramírez squandered his side’s only good opportunity in the first half when he sent a penalty kick, that he had earned, high over the crossbar.

“It was very hard game, they play very well as a tight unit,” Simeone said. ”(It was) a game that ended in a draw that we didn’t want, but we gave it our all.”

Getafe fought back once Real Sociedad was reduced to 10 men to win 2-1 in San Sebastian, leaving Sociedad in fifth place just ahead of Sevilla.

Espanyol fell second to last after losing 2-0 at Mallorca.