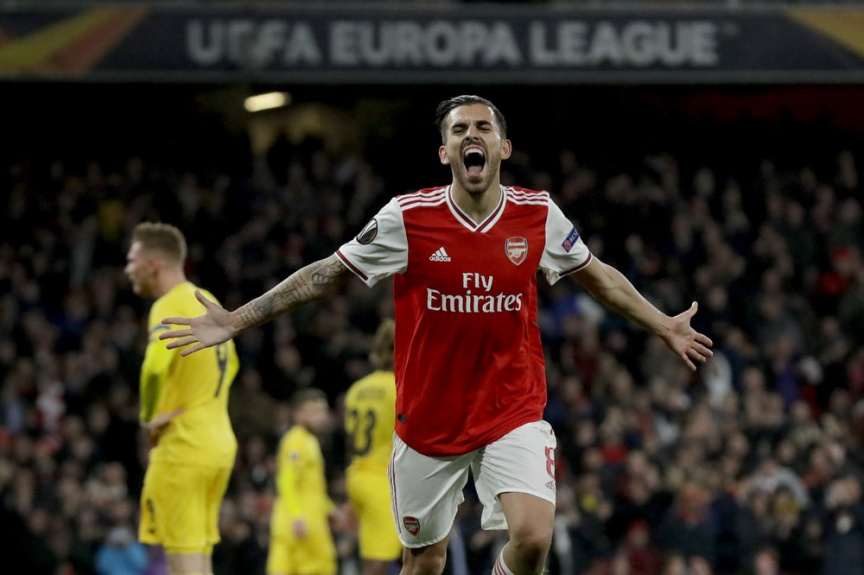 Manchester United’s scoring woes were on display again as the English powerhouse labored to a 0-0 draw at AZ Alkmaar in another poor display in the Europa League on Thursday. Arsenal had no such problems, with teenage forward Gabriel Martinelli scoring twice in a 4-0 win over Standard Liege.

United has not scored more than one goal in any of its last eight matches in all competitions and the latest setback will only increase the pressure on manager Ole Gunnar Solskjaer to get the team’s attack firing again.

Arsenal manager Unai Emery may have unearthed a real gem in Martinelli, though, as the Brazilian has now scored four goals in two starts for the club. Against Liege, he netted twice within two minutes early in the first half and set up another goal for Dani Ceballos in the second.

In Luxembourg, the Group A game between Dudelange and Azerbaijani club Qarabag had to be suspended in the first half for after a drone flew over the pitch carrying what looked an Armenian flag. The drone incensed Qarabag players, who tried to hit it with the ball.

Azerbaijan and Armenia are in a territorial dispute over the Nagorno-Karabakh region. Play was suspended for about 15 minutes with Qarabag leading 2-0, but play later resumed, with Qarabag winning 4-1.

Another Premier League club, Wolverhampton Wanderers, secured its first win of the campaign as Willy Boly scored deep in stoppage time for a 1-0 win at Besiktas.

Martinelli is making quite an early impact at Arsenal.

The Brazilian headed home Kieran Tierney’s cross 14 minutes into the game before hitting the net from inside the area two minutes later after collecting a pass from another teenager, Reiss Nelson.

Martinelli also netted twice in his first start for the club in the English League Cup last week.

Martinelli was a constant threat throughout and came close to a hat trick several times in the second half. In the 57th, he chipped the ball for Ceballos to score his first goal for the club

In the other Group F game, Frankfurt recovered its 3-0 home defeat to Arsenal by earning a 1-0 win in Vitoria.

Ole Gunnar Solskjaer went with a youthful lineup again, with 19-year-old full-back Brandon Williams making his first start for the club and fellow teenager Mason Greenwood _ who became United’s youngest ever scorer in European competition in the last round _ playing up front.

Greenwood couldn’t come to Manchester’s rescue this time, though, nor could anyone else.

Greenwood had United’s best chance but saw his close-range shot blocked by a defender in the first half. Alkmaar did have the ball in the net after 11 minutes, but Myron Boadu’s effort was ruled out for offside.

The match was played on an artificial surface at the ADO Den Haag Stadium in The Hague as Alkmaar’s ground is not available.

With United languishing in 10th place in the Premier League on just nine points from seven games, winning the Europa League might be the only chance to return to the prestigious Champions League.

Partizan won at Astana 2-1 at the other Group L game.

Boosted by their first Premier League victory of the season, 2-0 over Watford on Saturday, Wolves claimed the first win of their Europa League debut in Istanbul.

After losing 1-0 to Braga at Molineux two weeks ago, the game seemed to be heading for a 0-0 draw at Besiktas before defender Boly netted three minutes into injury time.

Wolves still trail group leaders Braga and Slovan Bratislava, who played to a 2-2 draw in the other Group K game.

Forward Jody Lukoki was the fastest to score on Thursday night, putting his Ludogorets 1-0 ahead after just 37 seconds at Europa League newcomer Ferencvaros. Rafael Forster added two more for a 3-0 victory in Group H. The Bulgarian club has a full six points after scoring eight goals in two matches. Espanyol earned 2-0 win at CSKA Moscow to trail by two points.

In a match of two former European Cup winners, Feyenoord beat Porto 2-0 in Group G, while Rangers lost 2-1 at Young Boys in Bern.

In Group I, Saint-Etienne against Wolfsburg and Olexandriya vs. Gent both ended in a 1-1 draw.

Borussia Mönchengladbach scored in stoppage time for a 1-1 draw at Istanbul Basaksehir for the club’s first point. Newcomer Wolfsberg also earned a 1-1 draw against Roma at home for both teams to top the Group J table with four points.

Lazio rebounded from a 2-1 loss to Cluj, edging Rennes 2-1 in Group E. Celtic’s 2-0 victory over Cluj put the Scots atop the group standing with four points.

PSV Eindhoven took control of Group D after dispatching host Rosenborg 4-1. Sevilla, the most successful team in the Europa League made it two wins from two after with a 1-0 home win against APOEL.