Prince Harry lashes out at UK press for treatment of Meghan 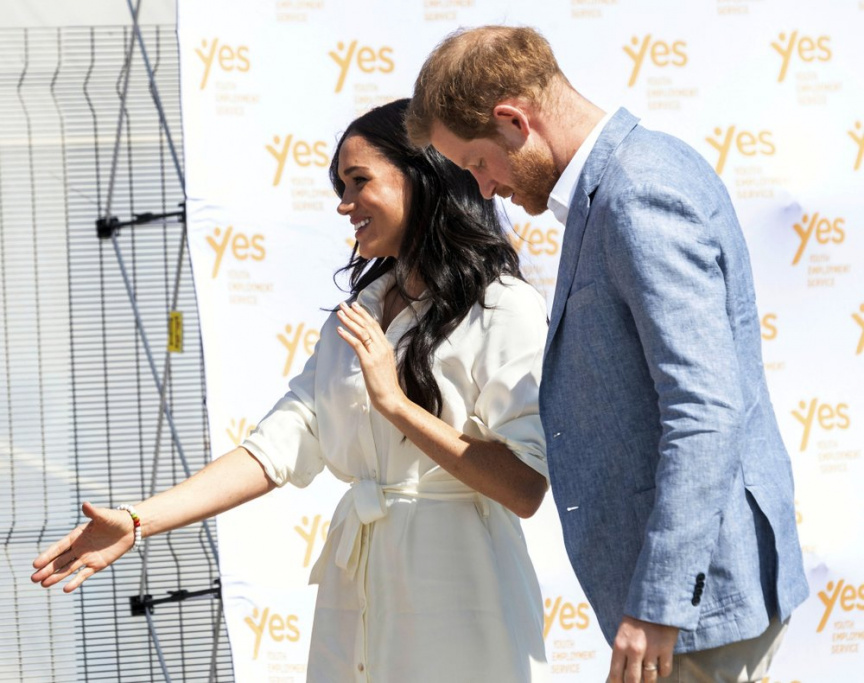 Britain's Prince Harry and Meghan, Duchess of Sussex visit a Youth Employment Services Hub in Makhulong, Tembisa, a township near Johannesburg, South Africa, Wednesday Oct. 2, 2019. The royal couple are on the last of their 10 day Africa tour. (AP Photo/Christiaan Kotze)

LONDON (AP) — Prince Harry has lashed out at the British media for its treatment of his wife, Meghan, accusing it of hounding her the way it did his mother, Princess Diana, who died in a 1997 car crash while trying to elude paparazzi.

“My deepest fear is history repeating itself. I’ve seen what happens when someone I love is commoditized to the point that they are no longer treated or seen as a real person. I lost my mother and now I watch my wife falling victim to the same powerful forces,” Harry said.

His rebuke of the press, and a lawsuit filed by Meghan, the Duchess of Sussex, against the Mail on Sunday newspaper for publishing in February a letter she had written to her estranged father is overshadowing the final day of his family’s tour to southern Africa.

The ginger-haired, bearded prince — often seeming so light of mood in public — said he could no longer be a “silent witness to her private suffering.”

Releasing what appears to be years of pent-up anger at the press, he said some newspapers have repeatedly “vilified” Meghan and published “lie after lie” about her.

Harry and his older brother Prince William have long had a strained relationship with the press. They grew up in the spotlight and were young boys when their parents’ acrimonious divorce received wall-to-wall coverage.

In the civil lawsuit, Meghan’s lawyers accused the newspaper of copyright infringement, misuse of public information and violation of data protection laws.

The Mail on Sunday said it stands by its story and will fight the case in court.

Harry and Meghan enjoyed almost worshipful attention from the press when they married in May, 2018, but the tone has changed in recent months. The couple has been criticized for using taxpayer money to renovate their home and for traveling on a private jet while calling for more action on climate change.

They did receive generally positive coverage on their trip to southern Africa, which also served as a debut in global diplomacy for four-month-old Archie.

Archie’s sole public showing was also a rare public appearance by ailing Nobel Peace Prize laureate Archbishop Desmond Tutu, who greeted the baby with a gleeful smile and a gentle kiss on the forehead.

Harry and Meghan paid tribute to Diana’s legacy throughout the trip, and he visited the former minefield in Angola where she had walked 22 years ago. Clad in body armor, he also visited a partially-cleared minefield, as Diana had done, and set off a controlled explosion.

The royal couple was greeted in southern Africa with interest but nothing like the minute-by-minute coverage that meets them in some other parts of the Commonwealth.

Meghan was praised for her warmth, her quiet visit to a makeshift shrine to a university student whose rape and murder set off national protests over South Africa’s high rate of sexual violence, and her heartfelt statement during her first public event that “I am here with you as a mother, as a wife, as a woman, as a woman of color and as your sister.”

Britain's Meghan, Duchess of Sussex, centre, talks with mothers during her visit to the Mothers2Mothers organisation, which trains and employs women living with HIV as frontline health workers across eight African nations, in Cape Town, South Africa. (Henk Kruger/Pool via AP, File)

It was unusual for Meghan, whose mother is black and father white, to talk in public of her racial heritage.

She spoke on many occasions during the tour about the need for the empowerment of women. The couple also drew kudos for jettisoning starchy protocol and hugging people with enthusiasm.

Local coverage was not all welcoming, however. The well-regarded Mail &amp; Guardian weekly in Johannesburg called the couple’s visit “a right royal pain.”

In an editorial, the paper criticized the “breathless coverage” that had surrounded the royals’ visit as a leftover from colonial days.

“South Africa has plenty of kings and queens of its own, with their kids, without having to import others,” the Johannesburg newspaper said.

“Why exactly do we care so much about these people?”

With the Africa trip concluded, the couple plans to return home to deal with possible fallout from Meghan’s lawsuit and Harry’s broader attack on the press.

The Mail on Sunday said it will defend itself “vigorously” against the suit and said it had done nothing wrong.

“Specifically, we categorically deny that the duchess’s letter was edited in any way that changed its meaning,” the tabloid said in a statement that refuted one of Harry’s claims.

Harry had last criticized the press directly in 2016, before he and Meghan became engaged. He said at the time that the press was hounding her viciously and that there was a racist tinge so some of the coverage. The prince said he feared for her safety.

Questions of racism linger as Harry, Meghan step back