T-Jetty fire; President vows to prevent repeat of such incidents 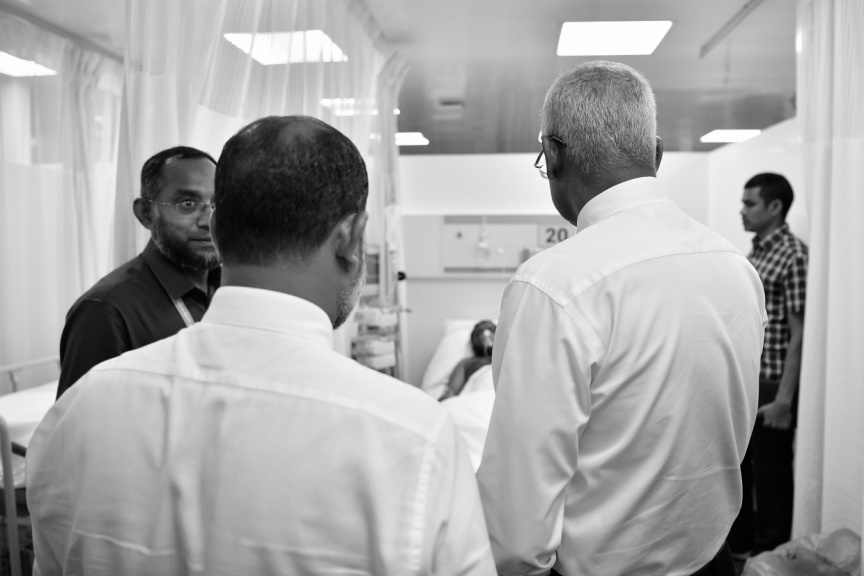 President Ibrahim Mohamed Solih at IGMH visiting those injured by the fire that occurred in T-Jetty area of Male' city. (Photo/President's Office)

President Ibrahim Mohamed Solih has stated that everything possibl will be done to prevent repeats of incidents such as the fire that happened in the T-Jetty area of Male' city. The President also visited those affected by the fire last night.

The President also visited the site of the incident shortly after the fire was brought under control and spoke with the authorities at the scene who battled to douse the flames. The incident yesterday left seven people with burn injuries and IGMH reported that despite one of the men being treated in the ICU, none of the injured's conditions were serious.

The Hospital also treated a person affected by smoke and another who had fractured his hand. A total of nine people were treated regarding the incident yesterday.

The incident happened on a speedboat named "Navi 3" from A.A Ukulhas that travels between Male' city and A.A atoll. It took authorities nearly an hour and a half to control the fire and the speedboat eventually sank underwater after the fire was extinguished. Three bowsers at the location were also destriyed by the fire.

The scene was visited by Defence Minister Mariya Ahmed Didi, Home Minister Imran Abdulla in addition to the President, who vowed that everything possible will be done to ensure that such an incident is not repeated. The President also thanked everyone who had helped to extinguish the fire.