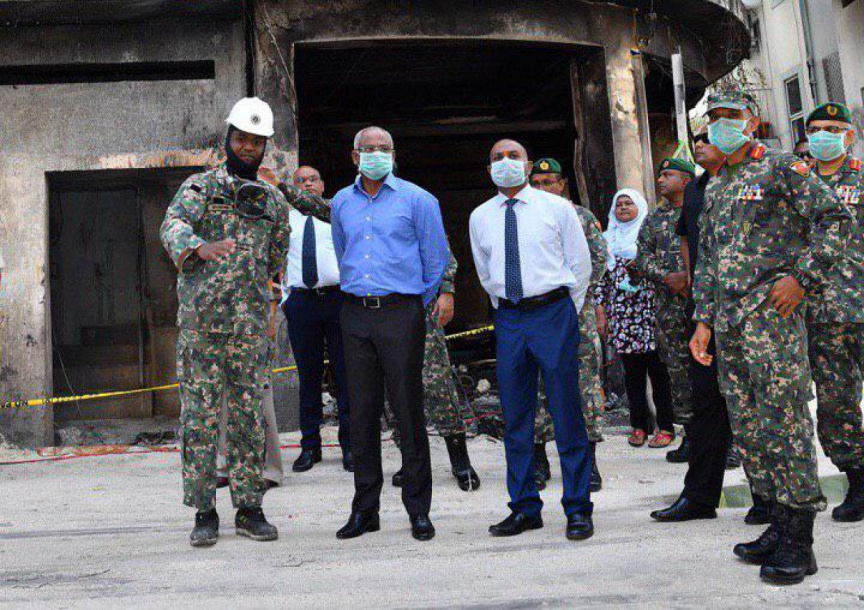 President Ibrahim Mohamed Solih has visited the site of the devastating fire that hit a densely populated neighborhood of Male' city on September 20, shortly after arriving back in the country after taking part in the United Nations General Assembly.

The President arrived back in the Maldives early in the morning after taking part in the General Assembly in New York, USA.  The President was received at the Velana International Airport by Vice President Faisal Naseem.

The first stop by the President was the location of the fire that occurred less than two weeks ago. The fire originated from a chemical storage facility in H. Thilafushige.

The President was in the country at the time of the fire and visited the site on the night of the incident before visiting those families affected by the fire. The President also ordered strong action after meeting with his cabinet to move all the chemical storage facilities in the city elsewhere before leaving for New York on September 21.

The President highlighted on pressing issues such as climate change, Palestinian conflict, Maldivian foreign policy and security of the Indian Ocean. The President also announced that the Maldives would stop single-use plastics by the year 2023.

Several meetings on the agenda at the UN were taken part by the President including the Climate Action Summit and the Strategic Responses to Terrorist and Violent Extremism Leader's Dialogue.