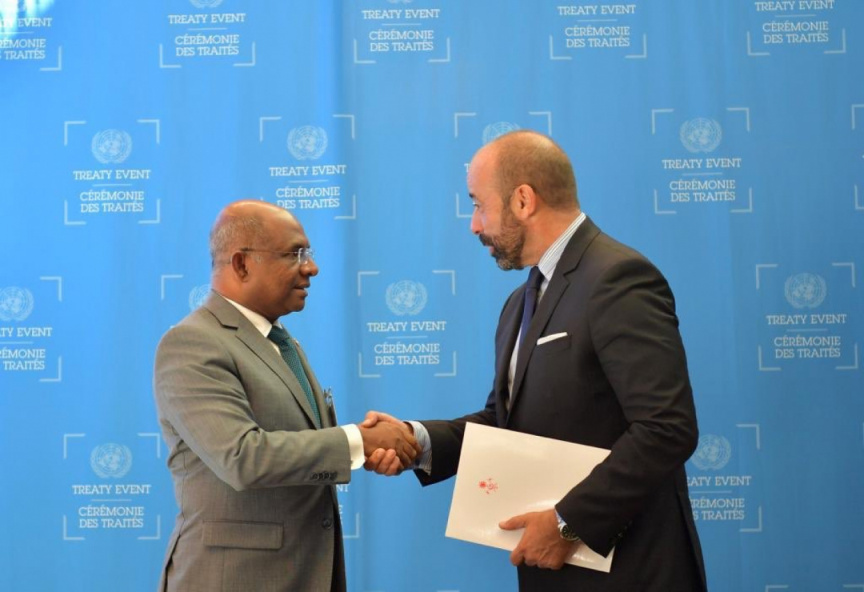 Foreign Minister Abdulla Shahid at the ceremony to hand over the documents of the Maldives participating in the three conventions of United Nations. (Photo/Foreign Ministry)

The other conventions that the country signed were the "The Convention on Cluster Munitions" and "The Third Optional Protocol To The Convention On The Rights Of The Child".

The signed documents for these three conventions were handed over to the UN Office of Legal Affairs at a ceremony held in the United Nations headquarters by Maldivian Foreign Minister Abdulla Shahid.

The United Nation's Arms Trade Treaty was created to combat the sale of illegal arms dealing in the world and was approved for participation by the Maldivian Parliament on September 4.

The Convention on Cluster Munitions was created by the UN to stop the use of "Cluster Bombs" which can be used to devastate a large area and potentially kill civilians in large numbers. The Maldivian Parliament approved to take part in this convention on September 3.

The Third Optional Protocol To The Convention On The Rights Of The Child is an optional protocol for child rights and cases and was approved by the Parliament on September 4.

The Maldives also took part in the United Nations' Treaty on the Prohibition of Nuclear Weapons earlier this week.

Fall in the number of cases reported to Gender Ministry