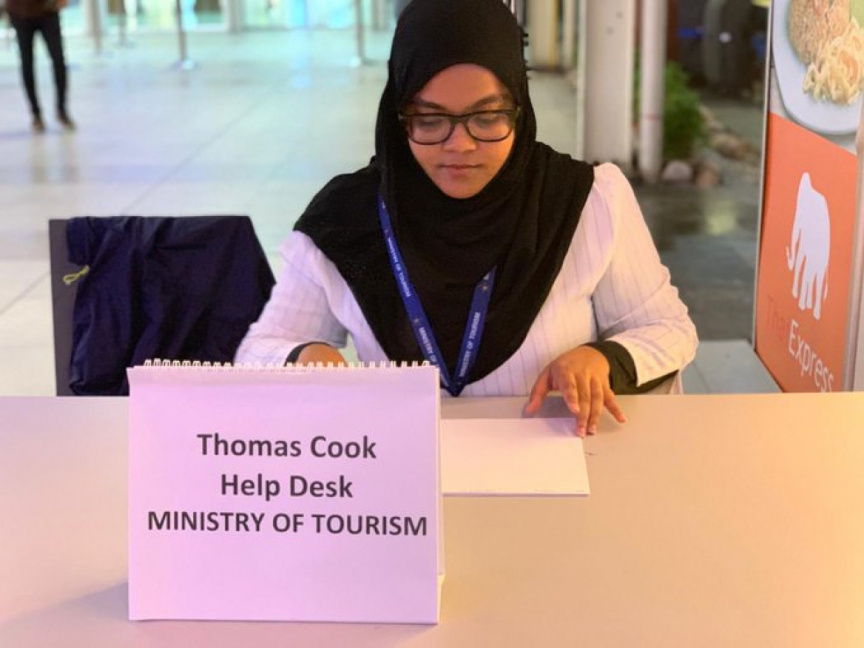 Help Desk set up by the Ministry of Tourism in Velana International Airport for clients of Thomas Cook. (Photo/Tourism Ministry)

The Maldivian government has stated that it will assist the clients of British travel company Thomas Cook to return to their home countries.

Thomas Cook, the world's oldest travel company has declared bankruptcy after being faced with a debt of USD two billion. A statement by the company's board read that there was no other choice but to declare bankruptcy at this stage.

The British Civil Aviation Authority has also confirmed that the businesses of Thomas Cook and its four airlines were now defunct, resulting in the unemployment of more than 21,000 of its employees in 16 different countries.

The Maldivian Tourism Ministry and MMPRC have established a help desk at Velana International Airport to assist customers of the company.

All travellers affected by the bankruptcy of @ThomasCookUK are requested to seek any assistance needed from the Help Desk placed by @MoTmv and @visitmaldives at the departure gate of @VelanaAirport, or by calling the hotline +960 7223131 | +960 9423131. pic.twitter.com/Bla7sGC6tn

MMPRC Managing Director Thoyyib Mohamed stated that the news of Thomas Cooks' bankruptcy was a saddening event and that the main focus would be on assisting the customers of the company to return home. This statement was also echoed by Tourism Minister Ali Waheed who stated that the government would assist in solving the difficulties faced by the clients of Thomas Cook in returning home.

The company created in 1841 had been facing a lot of financial difficulties due to the ongoing Brexit process and the high level of competition in the tourism industry.

Exhibition for products of creative women held at VIA