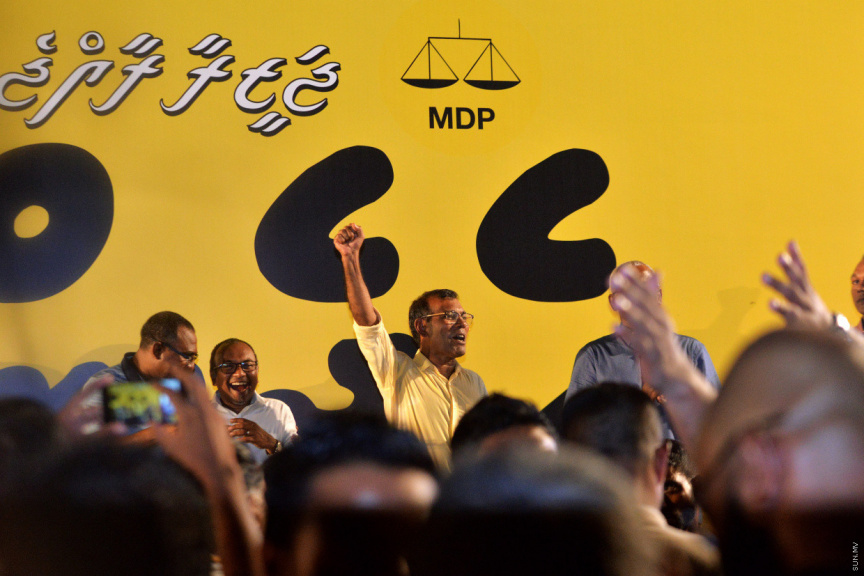 April 6, 2019; The celebrations at the Lonuziyaaraiy Kolhu area regarding the victory by the governing MDP in the most recent parliamentary election. (Sun Photo/Ahmed Aushan Ilyas)

Speaker of the parliament and former president Mohamed Nasheed has criticized Maldives Police Service after accusing the institution of placing him under surveillance.

Nasheed was speaking at the MDP's national congress when he criticized the police. Nasheed stated that the Presidential Commission on Disappearances and Deaths (DDCOM)'s report showed that the country was hit with violence that spurred between a group with extremist ideologies and another group with secularistic ideologies.

Nasheed then stated that the report showed the involvement of police in the activities and violence carried out by the extremist group in the country.

"I have been facing a lot of dangers that I know of. I was informed by MNDF three nights ago that the police were monitoring and keeping me under surveillance. I believe that this is something that might be done by the Police," said Nasheed.

Nasheed reminded everyone that one of the important things agreed upon when the current administration came to power was to reform the police. He also stated that police were the foundation of justice in the country, and the criminal justice procedure of the country could not be reformed without reforming the police.

"MDP should not allow police or MNDF to disobey and go beyond the limits in order to damage the government. We will speak about everything regarding the issue," said Nasheed.

Nasheed asked the MDP's congress to discuss and identify what needs to be done to reform the police. He repeatedly stressed that this was not something done against the government.

STELCO celebrates 70 years of service with a new logo