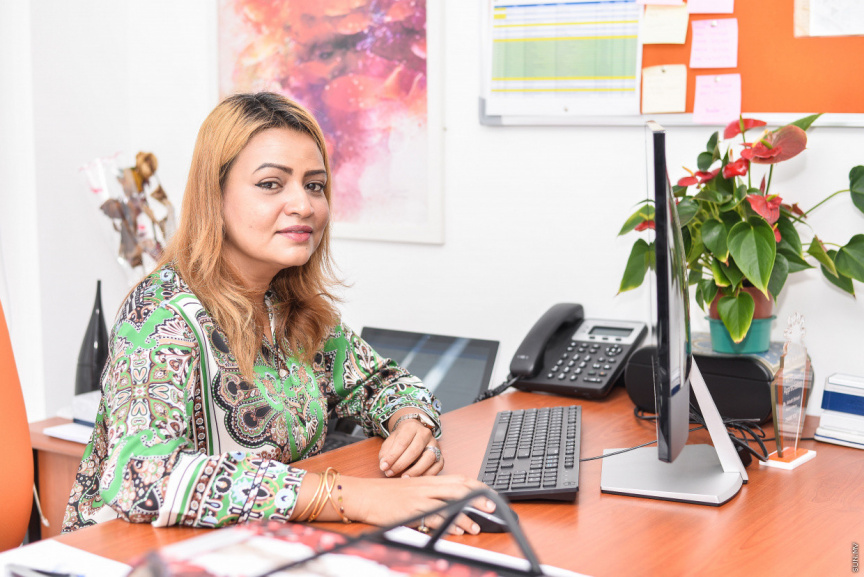 "I was not planning to take on a big project immediately after my return; but I took up the Immigration project just for exposure. Back then all government buildings were plain and white. I was given the freedom to design it any way I wanted by the then Controller of Immigration," Shimani, who is now the Director of Planning at Sun Siyam Group, reminisced about her debut project.

"So I revamped the whole office and brought some sweeping changes which completely changed the layout of the office. The project left the heads of Immigration very satisfied and even the public was left impressed as well. It was after that when people actually started to recognize me. I started to get project offers from both the government and private sector," said Shimani.

Her journey to the top was not without its fair share of challenges. She was downcast with the ideas of some friends who tried to convince her that it was not an industry where she could have a future.

Shimani wasted no time in proving them wrong when she returned to the Maldives after concluding her studies and showed that interior design indeed does have a bright future in Maldives within no time. Shimani who started her career with the Immigration project, later took up design projects for the then ID Card Unit, designed five stalls for STO in a Trade Fair, and even some components of tourist properties.

She was then presented with the opportunity to take her talent abroad when a Singaporean company offered her the chance to work with them in 2005. In Singapore, Shimani was involved in procurement works, project management, and business management responsibilities for different companies.

"I always started out with design works, but my managerial and planning methods always got noticed and approved, and saw me get promoted to managerial or operational roles," Shimani spoke about her time in Singapore.

Success seemed to follow Shimani everywhere she went and in 2012, she got the opportunity to design the office of the UN's UNDP Global Center for Public Service and Excellence (GCPSE) in Singapore. She was the perfect candidate that UNDP was on the lookout for.

After the project, Shimani was offered the chance to work in UNDP as Personal Assistant to the Director and Administrative Assistant of the organization. Even though this was not her field, it was a stint that Shimani enjoyed thoroughly.

After a few years, Shimani moved back to the Maldives due to family reasons and ended up working in the industry that she was destined for once again, when she joined as the Director of Planning at the Sun Siyam Group in 2018.

"The main tasks here are to maintain, develop and design resorts. I am involved in everything regarding the resort from the starting point of planning and construction to its grand opening," Shimani described her current work.

The planning process of the Sun Aqua Iru Veli resort of the Sun Siyam Group was already complete when Shimani joined the team. However, this did not stop her from being heavily involved in the remaining processes until the resort opened and welcomed its first guests in December 2018. Her role in the ongoing property development projects of the resort is also massive.

"The current projects are colossal when compared to my previous projects. Most of them have to be started from scratch, but this is not something that a woman cannnot do,"

"A resort is just a construction site at first and you have to venture and hop over wooden planks or wander around in the mud in the scorching sun or the cascading rain. It is not an easy task," she explained.

But the end result of the finished property from her hard work and instructions bring her a happiness that erases the difficulties of the job from her mind completely.

When she was freelancing for projects in Male' city, she would casualy stroll into construction and hardware stores to check and purchase fittings and pipes for her projects like she belonged there, attracting the eyes of many people who were left suprised. Why? Because seeing a woman in such a place carrying out such a work was somewhat of a rare occurance seen in the Maldives.

"I always believe that this was because of the stereotype that labels men as the only gender that should be working in construction and other such related fields. But that's not true! Women can work in the industry as well. Noticing problems and issues in the project is much easier when you are on location, at the site," said Shimani.

Shimani organizational skills come from her life; her home is just as organized as her projects. She is quick to notice small changes at home and office too. Interior design and organizing is an important piece of her life.

"Things may not always run according to plan. But its always good to have a plan; be it a backup plan too," said Shimani.

Love for literature promoted with #EmmenvesFoiyKiyamaa