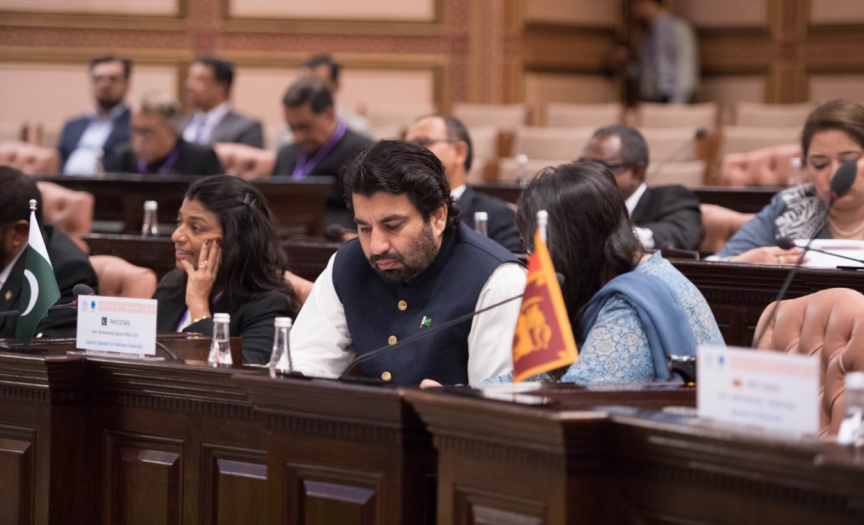 Words have been exchanged between the Pakistani delegation and the Indian delegation at the ongoing 4th South Asian Speaker's Summit being held in the Maldives.

The two delegations had heated exchanges in the Maldivian parliament regarding the current conflict in Kashmir. Speaking in the Maldivian parliament, Deputy Speaker of Parliament of Pakistan, Qasim Khan Suri stated that a blind eye cannot be turned on the situations with Muslims in Palestine, Rohingya Muslims and the residents of Kashmir when speaking about maintaining peace.

The speech of Deputy Speaker of Pakistan, Qasim Khan Suri was interrupted by a point of order by the Indian delegation. The point of order by India was allowed after some time by the Maldivian Parliament speaker Mohamed Nasheed and Martin Chungong Secretary-General of the Inter-Parliamentary Union who were presiding over the summit.

The point of order by the Indian delegation was presented by the translator of Om Birla, the Speaker of Lok Sabha – Lower House of Indian Parliament who stated that the issue of Kashmir was an internal matter of India. The Indian delegation also pointed out that the issue of Kashmir was in no way related to the topic of the discussion at the summit since the topic was on discussions regarding attaining sustainable development goals.

Indian officials stated that the issue of Kashmir cannot be raised at such a forum and requested that the speech by the Pakistani officials be erased from the record.

This was responded by the Pakistani officials who raised a point of order that sustainable goals can be attained by guaranteeing human rights first. The official also questioned whether the attained goals be implemented in an empty land.

The comments by the Pakistani delegation sparked strong words of protest by the Indian delegation. The point of order by Pakistan was allowed to be completed by Speaker Mohamed Nasheed.

After the showdown, another flurry of point of orders followed and Indian officials claimed that Pakistan was not a country that was capable of speaking about human rights, which was responded by Pakistani officials who stated that Pakistan was not a country that creates terror or chaos and that words of such manner against the country should not be allowed to be spoken in the parliament. The Pakistani officials also asked how India was allowed to speak about Pakistan in such a manner when India claimed the conflict in Kashmir was an internal matter of the country.

"This is not good in any way, we are strictly against this," said the Pakistani official.

After countless efforts to control the two countries had failed, Speaker of Parliament Mohamed Nasheed had to order both officials to be seated before cutting the session short for lunch.