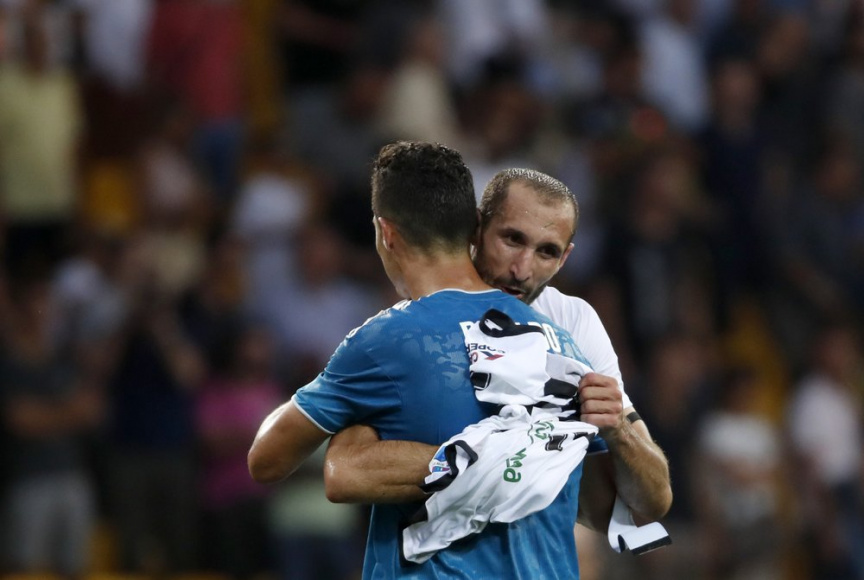 Juventus' Cristiano Ronaldo, front, celebrates with Juventus' Giorgio Chiellini at the end of the Serie A soccer match between Parma and Juventus at the Tardini stadium, in Parma, Italy, Saturday, Aug. 24, 2019. (AP Photo/Antonio Calanni)

TURIN, Italy (AP) — Juventus and Italy captain Giorgio Chiellini will have surgery on his right knee after tearing his anterior cruciate ligament in training.

The Italian champion announced the news in a brief statement on Friday, saying the defender will undergo an operation “in the coming days.”

Juventus did not estimate how long Chiellini will be out for but the injury normally requires three to six months of recovery, depending on the severity of the tear.

Juventus also posted a message of support on Twitter: “Good luck, Captain! Come back soon, even stronger than before ... We are all with you!”

It comes on the eve of Juve’s home match against one of its main title rivals, Napoli, and less than three weeks before the start of the Champions League group stage.

Chiellini had been called up for Italy’s upcoming European Championship qualifiers against Armenia and Finland, but has now been replaced by Lazio defender Francesco Acerbi.

The 35-year-old Chiellini scored the only goal as Juventus began its bid for a record-extending ninth successive league title with a 1-0 win at Parma last week.

Chiellini has helped the club to all those titles, playing a crucial part of its famed “BBC” defense along with Leonardo Bonucci and Andrea Barzagli.

Barzagli retired at the end of last season and Juventus has already reinforced its defense with the signings of Merih Demiral and Matthijs de Ligt, who became the most expensive defender in Serie A history when he completed a 75 million euro ($85 million) transfer from Ajax last month.