Parliament: Women can, whatever the position, even judgeship! 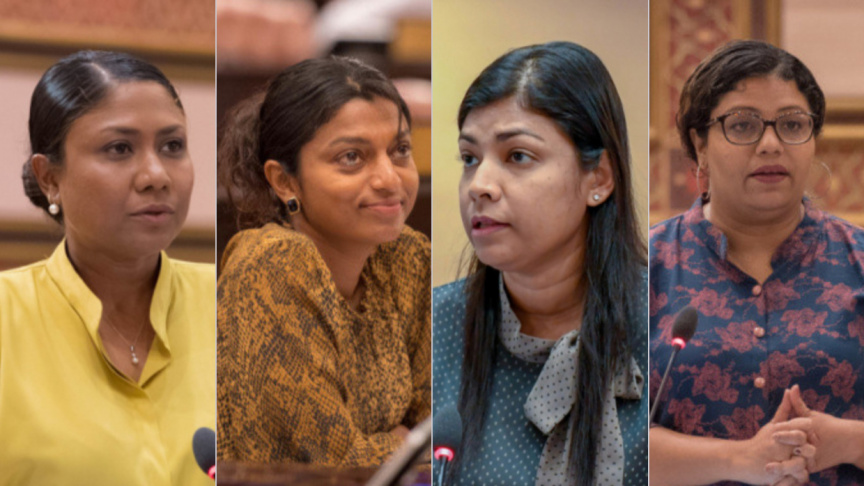 The emergency motion filed at the Parliament this Monday in protest against appointment of female justices to the Supreme Court has been vehemently criticized by parliamentarians.

The emergency motion over President Ibrahim Mohamed Solih’s decision to nominate and seek advice from Judicial Service Commission (JSC) regarding appointing Dr. Azmiralda Zahir and Aisha Shujoon Mohamed to the Supreme Court was filed at the Parliament by Nolhivaram MP Mohamed Nasheed Abdulla.

MP Nasheed argues appointment of women as judges violates the principles of Islam and Sharia law.

The emergency motion was accepted into the Parliament with the majority vote of 52 parliamentarians. But once the floor was opened for debate, parliamentarians announced they did not accept the motion because they supported it.

He said he did not vote to accept the motion because he supported it.

“But because it will create further confusion among the general public if I pass up this opportunity to debate on this. And because some people will purposely attempt to foster this confusion,” said Azim.

Azim said that the way to winning hearts and votes was through honest work, and not by using religion as a weapon.

He said that he was taking part in the debate to reaffirm the views of 70 percent of the general population.

He said that he would have otherwise rejected the motion.

Azim noted that women work as judges in several of the most populous Islamic nations.

“WOMEN WILL TAKE OVER EVERY POSITION, BE READY”

North Galolhu MP Eva Abdulla, who made history by becoming the first woman to serve as Deputy Speaker at the Maldivian Parliament, said that the appointment of female justices violated neither Maldivian laws, nor the principles of Islam.

Eva said that women would eventually take over every position, including the head of state and government. She warned everyone to be prepared for the change.

She ended her passionate speech with a strong verbal challenge to Nolhivaram MP Nasheed.

Voicing her support for the President’s decision, Eva said the decision had been wise, just, sound, and very necessary.

Her statement was met with applause from fellow parliamentarians.

Addu Meedhoo MP Rozaina Adam said that the issue was disputed, and had produced different religious rulings. She said that the Maldivian people should press forwards with the ruling which offers the broadest protection of the rights of women.

Rozaina also pointed that many Islamic nations had women serving as judges. She said that Maldives was therefore already far behind, and that the President’s decision should be hailed and applauded.

“This has been a long time coming. The entire Parliament needs to stand up to facilitate opportunities for our daughters,” said Rozaina.

“US FOUR WOMEN WORK HARDER THAN YOU 83 MEN”

Hinnavaru MP Jeehan Mahmood said that that the argument that appointment of women as judges violated the principles of Islam was straight-out false.

She also addressed the comment made by Nolhivaram MP Nasheed during the presentation of the emergency motion about female parliamentarians attending the Parliament “wearing tops and slippers” while their male counterparts had to wear shirts and shoes.

“Us four women, even if we come here wearing tops, slippers or heels, have proven we work as hard as, or even harder than the 83 male parliamentarians here,” said Jeehan.

She noted that Islamic nations had been appointing women as chief justices for years, and said that Maldives was too far behind, and needed to let go of backward mentality.

Thulhaadhoo MP Hisaan Hussain said the appointment of women as judges is not illegal.

But what is illegal is to be hindered from being nominated as a judge simply because they are women, she said.

Hisaan noted that being a male is not a prerequisite for judges.

She said that the debate on the topic was already over and done with, and that there was no point in taking about it any further.

“We already have 10 women serving as judges. These people weren’t acting as if the sky were falling when these 10 women were appointed. This is not a story about Chicken Little. We are not going to hide in a cave in Tora Bora behind Chicken Little,” she said.

“THIS EMERGENCY MOTION CAME STRAIGHT FROM A CAVE IN TORA BORA”

South Galolhu MP Mickail Ahmed Naseem said that the vote he cast to accept MP Nasheed’s emergency motion was his most reluctant vote to date.

He said that he hadn’t wanted to vote to entertain “this emergency motion which came straight from a cave in Tora Bora”.

“And after you spend nine months in a woman’s womb, you come to this world because she gave birth to you, you eat and drink because a woman feeds you, you are guided, you grow up, you grow muscles, and then you tell her she isn’t a human being? Isn’t this embarrassing? Is this something we should be debating about here?” asked Mickail.

He argued that no man who had fathered a daughter would have dared to file such a motion.

He said that the topic shouldn’t be debated on in 21st century Maldives.

Mickail said that he wasn’t willing to vote for any other nominees to the Supreme Court, but the two female nominees by the President.

“WOMEN ARE MORE CAPABLE OF RULING THIS COUNTRY”

Kaashidhoo MP Abdulla Jabir, too, said that he didn’t vote to accept the motion because he supported it.

He said that he was astonished to discover the existence of men who thought so little of women.

Jabir said that women served far more capably both at the Parliament and the Cabinet.

“And a woman will be far more capable of running this country,” said Jabir.

He said that he did not believe there was any reason why women being appointed judges should warrant divine condemnation, and that there shouldn’t be any position which women should be prohibited from filling.

“YOU SHOULD’NT ASSUME WOMEN ONLY EXIST TO COOK”

Maradhoo MP Ibrahim Shareef was visibly angry when he debated on the motion.

He said that times have changed, and that women now received equal education as men and were equals in the professional arena.

He said that the argument against women serving as judges is a misinterpretation of the Holy Quran.

“You shouldn’t assume that women should perpetually remain in the kitchens just because women had remained in the kitchens to cook at one point in history. We need to put an end to this mentality,” said Shareef.

He said that the key qualifications for a judge is possession of knowledge, integrity and fairness.

“Being a male or female is irrelevant,” said Siraj.

All parliamentarians who took part in the debate spoke in support of the nomination of female justices, and hailed the President for his “brave decision”.

'I did not propose any amendment regarding immigration'