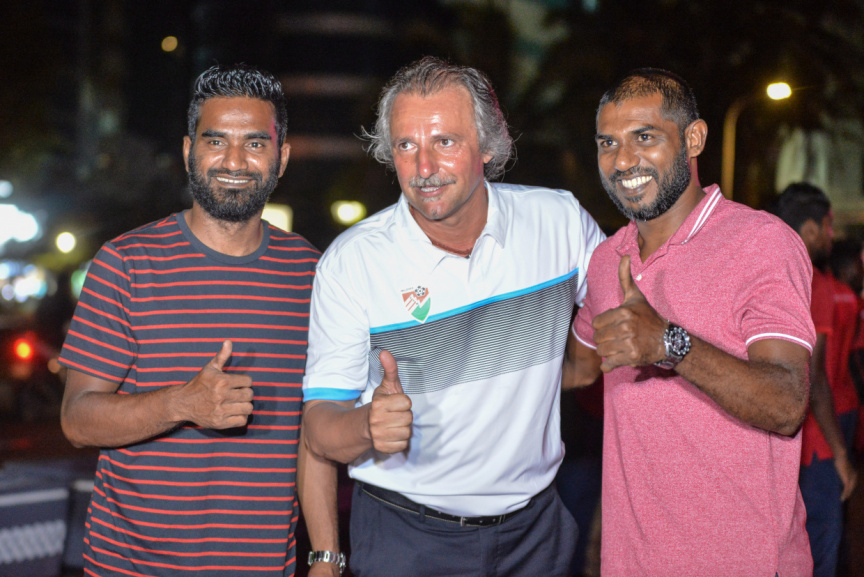 Retired national football team goalkeeper Mohamed Imran has accused the coaching team of bias in selection of players for the national football squad and has warned that such bias is detrimental to the future of Maldivian football.

Ali Ashfaq (Dhagandey), who many hail as the greatest Maldivian footballer of all time, and who won the best player and golden boot award in 2018, has been left out of the national football squad again.

Many have criticized national football coach Petar Segrt and Football Association of Maldives (FAM) over the decision to leave Dhagandey out of the 30-player squad announced for the upcoming World Cup Qualifiers and fixtures with Guam and China in the Asian Cup Qualifiers.

Weighing in his opinion, former national team goalkeeper, Imran Mohamed said the best performing players of the time must be selected to the national squad, and that bias and prejudice in the selection process is detrimental to the future of Maldivian football.

“It is more appropriate to use age-group squads to gain experience rather than the national squad,” said Imran.

He said that he couldn’t understand why Dhagandey should be left out of the national squad given his good performance in club football the past season.

Imran noted that Dhagandey had been selected the best football player of 2018, and continued to show an exemplary performance.

He expressed hope of seeing Dhagandey in the national jersey once more.

Imran and Dhagandey have a long history of working together both in international and club football. And both players had been instrumental in the winning Maldives first gold medal at an international football competition, the SAFF Championship in 2008.

Imran had voluntarily retired from international football in 2018, while Dhagandey was left out of the squad after deeming him too old.

The contrasting statements issued by Coach Petar over the issue has been indirectly criticized by coaches and players within the local football community over social media platforms.

FAM is yet to issue an official comment regarding the criticism directed at Coach Petar over the national squad selection.