Gibraltar releases Iran supertanker that US sought to seize 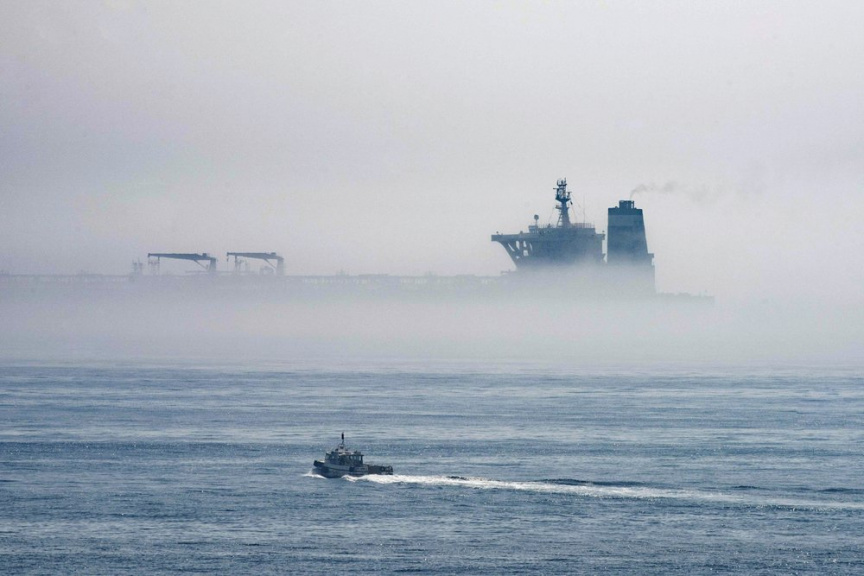 A view of the Grace 1 supertanker is seen through the sea fog, in the British territory of Gibraltar, Thursday, Aug. 15, 2019, seized last month in a British Royal Navy operation off Gibraltar. (AP Photo/Marcos Moreno)

MADRID (AP) — The British overseas territory of Gibraltar released a seized Iranian supertanker Thursday over last-minute objections from the U.S., potentially easing tensions between London and Tehran, which still holds a British-flagged vessel.

The release of the Grace 1 comes amid a growing confrontation between Iran and the West after U.S. President Donald Trump pulled Washington out of Tehran’s nuclear deal with world powers over a year ago.

In past weeks, the Persian Gulf region has seen six attacks on oil tankers that the U.S. has blamed on Iran and the downing of a U.S. surveillance drone by Iranian forces. Iran denied it was behind the tanker attacks, although it has seized other tankers.

Gibraltar Chief Minister Fabian Picardo said the U.S. could still begin a new legal procedure for seizing the Grace 1, but that provisions under the European Union’s sanctions regulations were ending Thursday after the Iranian government assured him in writing that the ship will not send its 2.1 million barrels of crude to a sanctioned entity in Syria.

Reacting to the developments, Iran’s Foreign Minister Mohammad Javad Zarif accused the U.S. of trying to “steal our property on the high seas.”

“Having failed to accomplish its objectives through its #EconomicTerrorism — including depriving cancer patients of medicine — the US attempted to abuse the legal system to steal our property on the high seas,” Zarif tweeted, calling the Trump administration’s moves a “piracy attempt.”

It was not clear whether the Grace 1 would sail away immediately; nor was it known what the Trump’s administration strategy was. The U.S. Justice Department did not respond to requests for comment.

“This is an important material change in the destination of the vessel and the beneficiary of its cargo,” Gibraltar’s Picardo said in a statement, adding that the move ensured that the Syrian government of President Bashar Assad would be deprived of more than $140 million of crude oil.

Gibraltar said it had “solid documentary evidence” that the vessel was bound for Syria when it was detained on July 4, but that the political fallout had prompted talks with Iranian officials in London.

As proof of those negotiations, Picardo’s office released copies of communications with the Iranian Embassy in the U.K. shortly after the British overseas territory’s Supreme Court decision to release the tanker.

“It’s there for the whole world to see,” Picardo told The Associated Press hours after the hearing. “Once a state says something in writing on its own letterhead, one is entitled to believe that they will comply with those obligations.”

The court had delayed its decision after the Justice Department made a last-minute application to extend the detention of the oil tanker, the Gibraltar government had said earlier Thursday. But there was no U.S. application to the court when the hearing resumed in the afternoon, the Gibraltar Chronicle newspaper reported, quoting the court’s chief justice, Anthony Dudley.

Gibraltar will “respectfully” deal with any application coming from the U.S. to open a separate proceeding to seize the tanker, Picardo told AP, adding that the government was not aware of the next logistical steps of the Grace 1.

He also rejected that Thursday’s decision represented a “swap of tankers.”

“We operate on the basis of complying with our own legal obligations,” he said.

The EU has endorsed U.N. sanctions against Syria and has imposed a broad range of its own restrictions against Assad’s government and its supporters. The restrictions include an oil embargo, limits on certain type of investments and a freeze of Syria’s central bank’s assets in the EU, among others.

In May, it extended until mid-2020 travel bans and the freezing of assets of 269 individuals and 69 entities. Among them is listed the Banyas refinery where the Grace 1′s cargo was allegedly headed on July 4 when it was seized in a British Royal Navy operation in the Strait of Gibraltar.

Shortly after that, Iran seized the British-flagged oil tanker Stena Impero, which remains held by the Islamic Republic. Analysts had said the release of the Grace 1 by Gibraltar could see the Stena Impero go free.

In a statement following the Gibraltar decision on the Grace 1, Britain’s Foreign Office warned Iran to abide by the assurances that led to the release. The U.K. also insisted that there should be “no comparison or linkage” between enforcement of sanctions and “Iran’s unacceptable and illegal seizure of, and attacks on, commercial shipping vessels in the Strait of Hormuz.”

Prime Minister Boris Johnson’s Downing Street office said Iran was discussed during his meeting with Trump’s national security adviser John Bolton earlier in the week, though no details were released.

Signaling preparations for the expected release of the ship, the captain, an Indian national, and three officers of the Grace 1 were released from detention, the Gibraltar government said.

The whereabouts of the crew, none of whom are Iranian, were not immediately known. The crew of the Grace 1 includes sailors from India, Pakistan and Ukraine, according to Iranian state television.

Beyond a few Gibraltar-flagged patrol boats, an Associated Press crew saw little security around the tanker Thursday. A handful of men could be seen on the deck, some looking through binoculars.

This is the second time the Trump administration has moved to seize a ship in recent months. In May, the Justice Department said it had seized a North Korean cargo ship used to supply coal to the isolated nation in violation of international sanctions.

In recent weeks, Iran has begun to step away from the deal by increasing its production and enrichment of uranium. It has threatened to take further steps in early September if Europe can’t help it sell its oil abroad.

Lina Khatib, head of the Middle East and North Africa program at Chatham House, said the U.S. request on the Grace 1 was based on its own imposed sanctions on Iran, and not the EU’s sanctions on oil exports to Syria.

“Although the U.S. expects its European allies to abide by these sanctions, it is up to the Gibraltar authorities to assess the allegations presented by the U.S.,” Khatib said.

Resolving the tanker dispute would help Britain’s Johnson focus on domestic issues as he works to complete Britain’s exit from the EU and prepare for anticipated national elections in the next few months.

The U.S. has been asking its allies to take part in a naval mission to protect shipping in the strategic Strait of Hormuz, at the mouth of the Persian Gulf, although European nations have been reluctant.

Britain has so far been the only nation to express willingness to join a maritime security mission. It has also been giving U.K.-flagged vessels a naval escort since the Iranian Revolutionary Guard’s seizure of the Stena Impero.