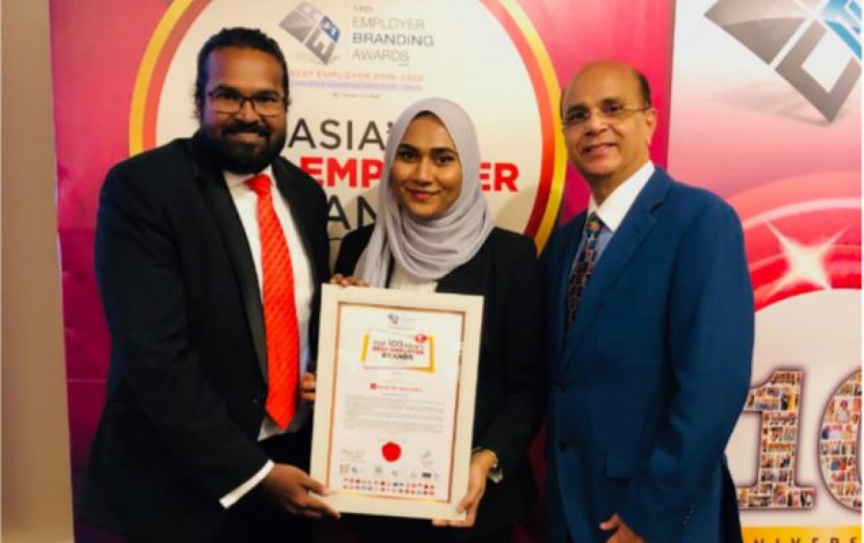 The Employer Branding Awards ceremony was held in Singapore this Thursday and attended by over 300 representatives from the human resources field in the Asia-Pacific region.

The national bank, in a statement this Thursday, attributed its award as one the best employers in the Asian region to its commitment to people excellence and continued emphasis to implement progressive policies for recruiting, developing and retaining talent to make the Bank one of the most attractive places to work in the region.

The award was accepted on behalf of the bank by Learning and Development Manager Mohamed Ashraf and Employee Relations Manager Asiyath Mohamed.

Upon receiving the award, BML’s People and Change Director Sahar Waheed stressed the significance of winning the award for the third consecutive year.

“This is the third year in succession that we were recognized at Asia’s Best Employer Brand Awards, which is in itself a noteworthy achievement. Our human resources strategy focuses on developing competent, motivated, customer-oriented employees to deliver the bank’s strategy. I would like to thank the team who have worked tirelessly to bring this award to the bank once again,” said Sahar.

99 percent of its staff are Maldivian citizens.

The BML, in its statement this Thursday, reiterated its commitment to human resource development.

“The bank takes great pride in implementing forward-looking human resources policies to ensure the highest professional standards of employee recruitment, development and reward. The bank holds regular events to honor its top performing staff and to recognize their loyal service,” noted BML in its statement.