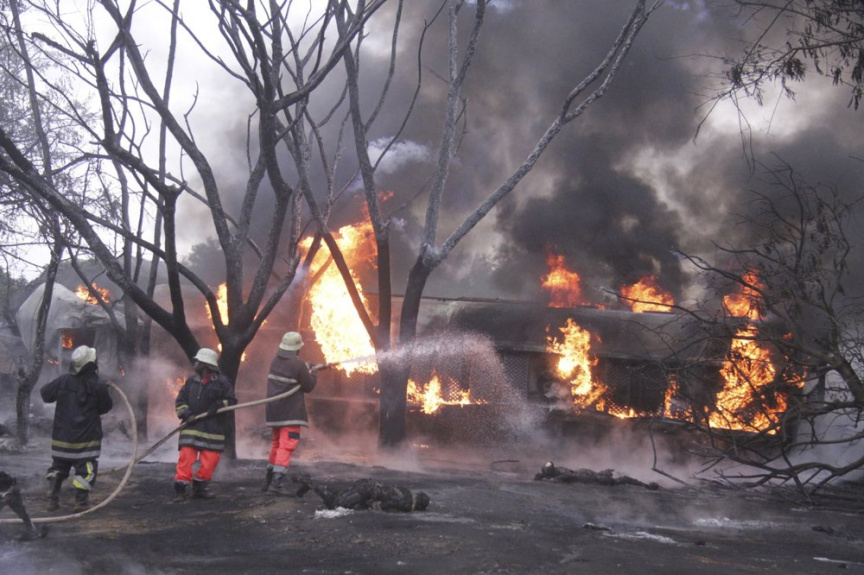 Fire fighters try to extinguish a Petrol Tanker blaze, Saturday, Aug. 10 2019, in Morogoro, Tanzania. A damaged tanker truck exploded in eastern Tanzania Saturday as people were trying to siphon fuel out of it, killing at least 62, in one of the worst incidents of its kind in the East African country. (AP Photo)

DAR ES SALAAM, Tanzania (AP) — A damaged tanker truck exploded in eastern Tanzania as people were trying to siphon fuel out of it Saturday, killing at least 62 in one of the worst incidents of its kind in the East African country.

Tanzanian state broadcaster TBC, citing police figures, said at least 70 more people were injured during the explosion in the town of Morogoro, located about 120 miles (200 kilometers) from the economic hub of Dar es Salaam.

Witnesses told The Associated Press that a crowd had gathered around the fuel tanker after it was involved in an accident early Saturday and some people were trying to siphon away fuel when the truck burst into flames.

In a statement expressing condolences, Tanzanian President John Magufuli said he was dismayed people attacked vehicles involved in accidents instead of offering help.

Residents are routinely killed by explosions while stealing fuel from incapacitated tankers in East Africa. Those who steal the fuel usually hope to be able to sell it cheaply to motorists.

In 2013, at least 29 people were killed on the outskirts of the Ugandan capital, Kampala, as scores swarmed around the scene of an accident.

There is limited awareness about the danger of explosions of damaged fuel tankers, said Henry Bantu, a road safety expert who runs the Tanzania-based Safe Speed Foundation. Local leaders need to do more to educate people on the risks, he said.

Two injured in fire extinguisher explosion at a godown

2 sustain burns in explosion onboard boat in Hulhumale'