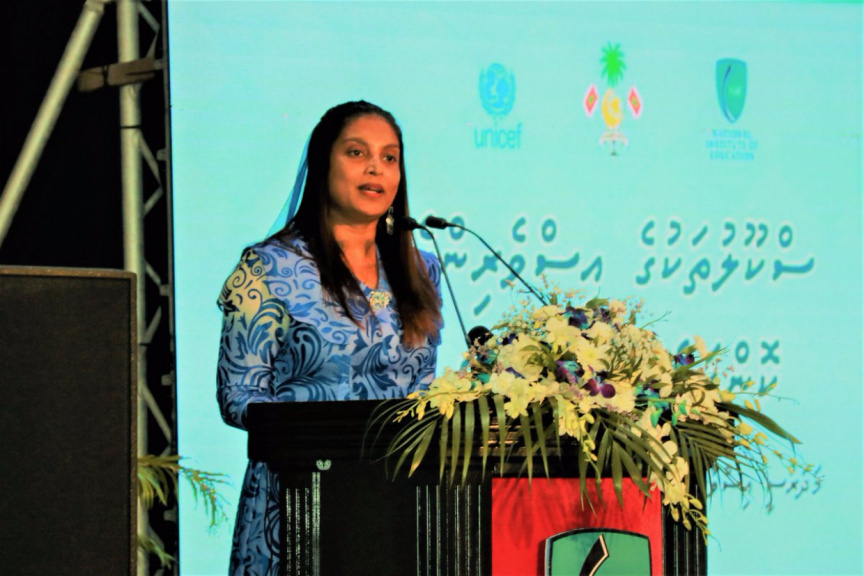 Minister Aishath Ali speaking at a seminar on education leaders. (Photo/Ministry of Education)

Education Minister Aishath Ali has stated that there are around 634 relief teachers without the necessary training working in Maldivian schools.

Minister Aishath was speaking at a news conference held at the President's Office to provide details regarding the work of the Ministry when she stated that a large number of teachers without the necessary training were teaching in primary grades of schools.

The Education Ministry had received criticism over its decision to bring a large number of foreign teachers to teach primary grades. These primary grade posts were mostly filled by local teachers before this decision by the Ministry.

The Minister stated that even she wanted to employ more Maldivian teachers, however, this was not an easy task due to the unavailability of trained local teachers.

"There needs to be a successive plan to train and source teachers. If such a plan does not exist, then we have no other choice but to find alternatives to cater to the current needs. If we look at our schools right now there are around 634 untrained teachers who are working," said Minister Aishath Ali.

Minister Aishath stated that the number of untrained teachers was a worrying concern and may result in adversely affecting the student's studies even.

"We have found that trained teachers are better than untrained teachers, and to cater our current needs we announced to find teachers," said the Minister. She also stated that three years were needed to train teachers fully and said that she was convinced that block mode trainings were not effective in training teachers.