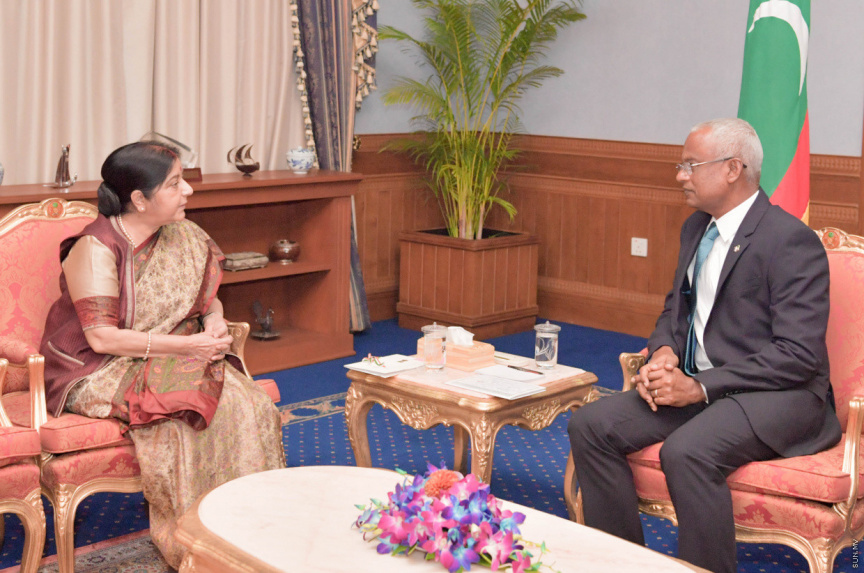 Ms. Swaraj meeting President Solih during her visit to the Maldives. (Photo/President's Office)

President Solih tweeted that Ms. Sushma Swaraj was someone who served India greatly and was a close friend of the Maldives.

Sad at the passing of @SushmaSwaraj. Our condolences to her loved ones, @PMOIndia and people of India. She was a public servant of extraordinary caliber and as External Affairs minister, a great friend of the Maldives. She was truly India’s daughter and will be greatly missed.

Foreign Minister Abdulla Shahid tweeted last night that Ms. Swaraj was a great friend of the Maldives and that India has lost a person who served the country greatly. Minister Shahid also emphasized the role that Ms. Swaraj played in restoring diplomatic relations between Maldives and India and sent his condolences to Indian leaders and Ms. Swaraj's family.

Deeply grieved to hear the demise of my good friend Smt #SushmaSawraj; Stateswoman extraordinaire, diplomat par excellence; A warm human being. Key architect of renewed Maldives-India friendship. Sincere condolences to bereaved family and people of India. May she rest in peace! pic.twitter.com/kcxbdsimxI

The Foreign Ministry has also sent condolences in the name of all Maldivians to Indian leaders.

Ms. Swaraj passed away at the age of 67 at the New Delhi All India Institute of Medical Sciences (AIMS) in India.

Ms. Swaraj filled the role of External Affairs Minister during Prime Minister Narendra Modi's first term in office and gained a reputation for being a kind-hearted individual who focused on assisting with consular issues faced by Indian citizens all over the world. Ms. Swaraj was applauded for directly assisting people who appealed for help through Twitter.

Ms. Swaraj did not compete in the last Lok Sabha election due to her ill health. She had previously been elected to the parliament on seven occasions.