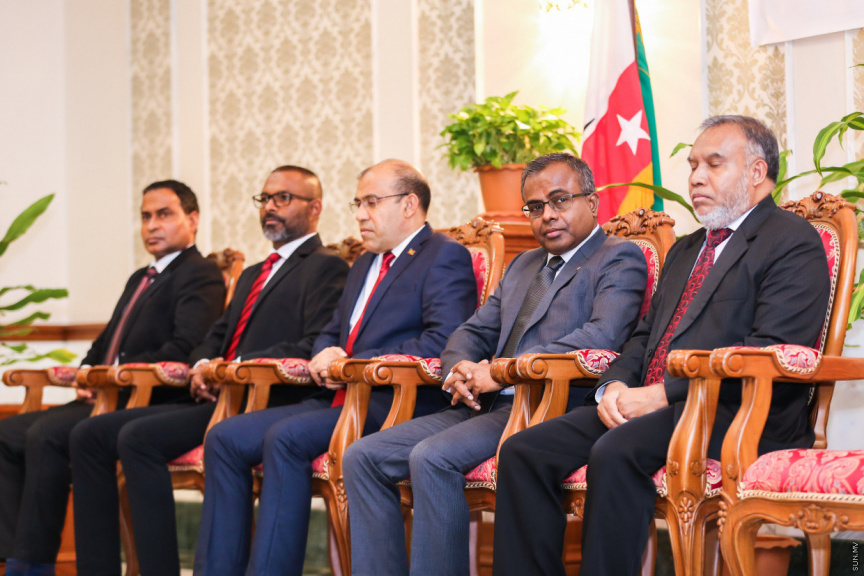 Supreme Court has announced the Prosecutor General’s Office made no request with the court for an arrest warrant on former Maldivian Vice President Ahmed Adeeb Abdul Gafoor after he was cleared of the sentences against him.

The court’s statement challenges an earlier statement by Prosecutor General Aishath Bisham that the PG’s Office has filed a request for an arrest warrant on Adeeb pending the outcome of appeal proceedings at the Supreme Court over the acquittal of Adeeb in an embezzlement case. She remarked that the PG's Office filed the request before Adeeb's recent escape.

The appeal in question was filed by the State following the High Court’s decision to overturn an eight-year prison sentence issued by Criminal Court in 2016 for embezzling a USD 5 million bank cheque issued by Kuredu Holdings to Maldives Marketing and Public Relations Corporation (MMPRC) as acquisition cost to develop a resort in Lh. Maabinhura.

Supreme Court, in its statement this Monday, said that the PG’s Office filed requests for an arrest warrant and a travel ban on Adeeb while he had been in India on medical furlough.

The court also said that Adeeb had been serving a prison sentence for contempt of court at the time, and that issuing a warrant under such a circumstance was redundant, and that the court therefore issued a travel ban on him as requested by the PG’s Office as a precautionary measure.

The Supreme Court said that the PG’s Office did not inform, or make any new arrest request with the court after Adeeb finished serving his prison sentence.

Adeeb is believed to have boarded tugboat Virgo 9 which was headed to India carrying construction material on Saturday, July 27. He was intercepted by the Indian authorities when the boat docked at the Tuticorin Port on Thursday, August 1.

He was placed into the custody of Maldivian authorities and expelled from India on Saturday, August 3; and the Coastguard ship carrying Adeeb arrived at Male’ City on Sunday, August 4.

Adeeb is currently back in custody of Maldivian authorities at the Dhoonidhoo Custodial.

He is scheduled to appear the Supreme Court for an appeal hearing over the embezzlement case on Tuesday.