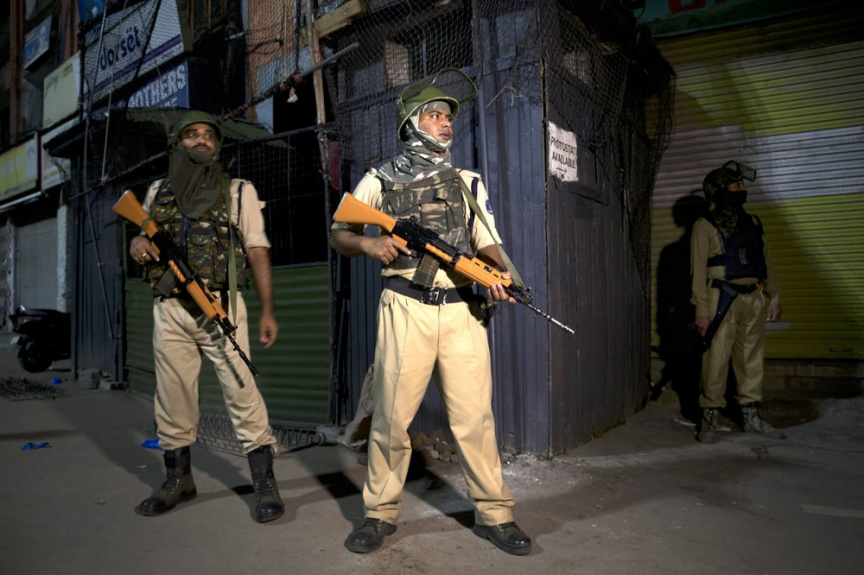 SRINAGAR, India (AP) — An indefinite security lockdown was in place in the Indian-controlled portion of divided Kashmir on Monday, stranding millions in their homes as authorities also suspended some internet services and deployed thousands of fresh troops around the increasingly tense region.

Meanwhile, India’s Prime Minister Narendra Modi held a Cabinet meeting at his residence in New Delhi amid speculation that the government could announce changes to how the Himalayan territory is administered.

Around midnight in Kashmir, government forces laid steel barricades and razor wire on roads and intersections to cut off neighborhoods in Srinagar, the region’s main city. The government issued a security order banning public meetings, rallies and movement and said schools would be closed.

Authorities also suspended internet services on cellphones, a common tactic to prevent anti-India demonstrations from being organized and to stop the dissemination of news.

The order affects about 7 million people living in the region.

The security deployment in recent days adds at least 10,000 soldiers and other forces in Kashmir, to what was already one of the world’s most militarized regions. India also has ordered thousands of tourists and Hindu pilgrims to leave the region.

The measures have sparked fears that New Delhi is planning to scrap an Indian constitutional provision that forbids Indians from outside the region from buying land in the Muslim-majority territory. Kashmiris fear the measures would be a prelude to doing away with the region’s special status and intensifying an ongoing crackdown against anti-India dissenters.

Tensions also have soared along the Line of Control, the volatile, highly militarized frontier that divides Kashmir between India and Pakistan, which both claim it entirely.

Indian firing along the Line of Control on Sunday wounded one woman, Pakistani police said. In Pakistani border villages, residents were moving to safer places or building and strengthening bunkers and shelters protecting them from cross-border fire.

Pakistan and India routinely blame each other for initiating border skirmishes.

Modi and his Hindu nationalist Bharatiya Janata Party won reelection early this year on a platform that included promises to do away with special rights for Kashmiris under India’s constitution.

At the Srinagar airport, hundreds of Indian and foreign visitors, including some Hindu pilgrims, congregated outside the main terminal, seeking seats on departing flights. Tourists and pilgrims also took buses out of the region, with authorities busing out hundreds of Indian students from Srinagar colleges.

Rebels in Indian-controlled Kashmir have been fighting Indian control since 1989. Most Kashmiris support the rebels’ demand that the territory be united either under Pakistani rule or as an independent country, while also participating in civilian street protests against Indian control. About 70,000 people have been killed in the uprising and the ensuing Indian crackdown.