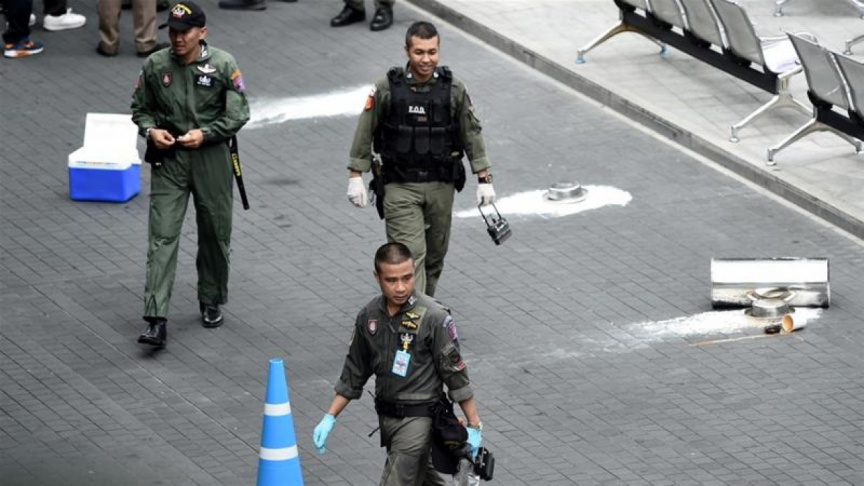 Authorities at the scene of one of the bombings. (Photo/AFP)

Six bombs that exploded in Bangkok the capital of Thailand, has left four people wounded.

A city that many Maldivians travel for business purposes, Bangkok is the venue of the ongoing South East Asian Nations (ASEAN) Foreign Minister's regional security meeting. Media reports from Bangkok state that the bombs that exploded were small scale bombs.

The Maldivian embassy has cautioned all Maldivians in Bangkok to take extra precautions and avoid crowded locations as well as to keep their passports with them at all times due to the increase in security. The Foreign Ministry has also stated that it is monitoring the situation in Bangkok closely.

Several small explosions were heard in Bangkok today hurting four local people. While security measures is being tightened the Thai Govt. has urged the public not to panic. We advise Maldivian citizens in BKK to take extra precaution, avoid crowded places and to carry passport.

Aljazeera news outlet reported that the first two bombs went off in two locations in central Bangkok around 9:00 in the morning. The third bomb detonated after a short while near a government building that houses cabinet ministers in the north of the city.

According to Aljazeera local police had found one bomb that did not detonate and have diffused it. Aljazeera has also reported that Thailand's Erawan Medical Center stated that none of the four people wounded in the bombings received serious injuries.

Thailand's police have stated that two people have been arrested due to fake bomb threats while the Prime Minister of Thailand Prayut Chan-o-cha has ordered an investigation into the attacks.