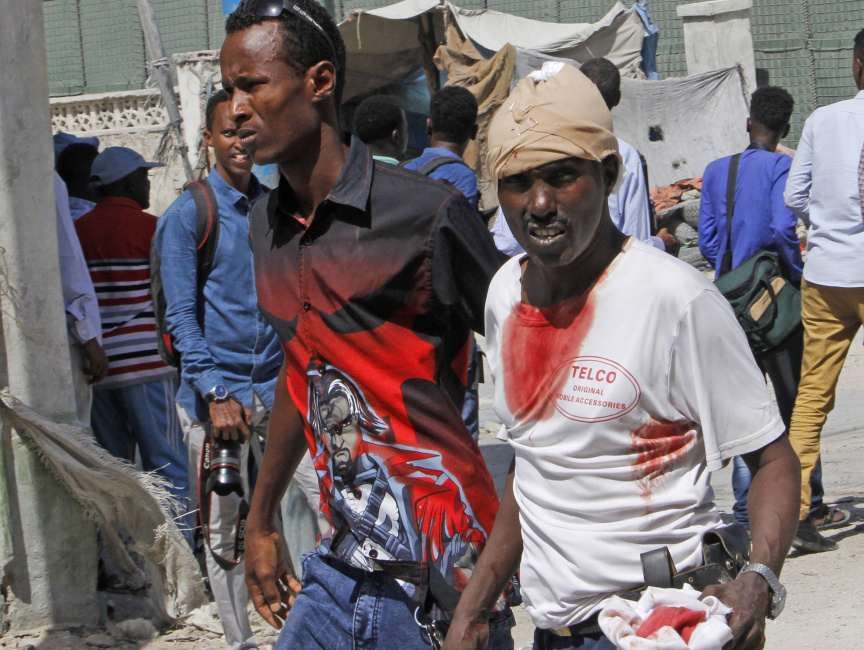 NAIROBI, Kenya (AP) — An explosives-packed vehicle detonated at a military checkpoint near Somalia's presidential palace, killing at least 16 people and wounding more than 20 others, police said. The al-Qaida-linked al-Shabab extremist group, which often targets Mogadishu, claimed responsibility for the attack.

Those killed include three staffers from the London-based Universal TV station, including prominent journalist Awil Dahir Salad, said police Capt. Mohamed Hussein, who gave the toll of dead and wounded.

The bomber targeted the checkpoint near the rear entrance of the heavily fortified palace, Hussein said. A lawmaker and a deputy mayor of Mogadishu were among those wounded, he said.

Soldiers also were among the dead, Col. Ahmed Mohamud said.

The blast and a second, smaller one nearby appeared to target those heading to work on what was a business day in the Horn of Africa nation.

A plume of smoke rose over the capital as ambulances rushed to the scene.

"At first I saw a vehicle driving to and fro, then we tried to stop people walking here and there, and then in the blink of an eye the vehicle exploded, causing havoc," traffic police officer Mohamed Harun told The Associated Press.

Al-Shabab, the most active Islamic extremist group in sub-Saharan Africa, was pushed out of Mogadishu years ago but continues to control large parts of rural southern and central Somalia.

The U.S. military, which partners with Somali forces and a 20,000-strong African Union peacekeeping mission, has greatly increased airstrikes against al-Shabab under the Trump administration. At least 47 U.S. strikes have been carried out this year.