PG’s office cabin renovated by private company at own expense 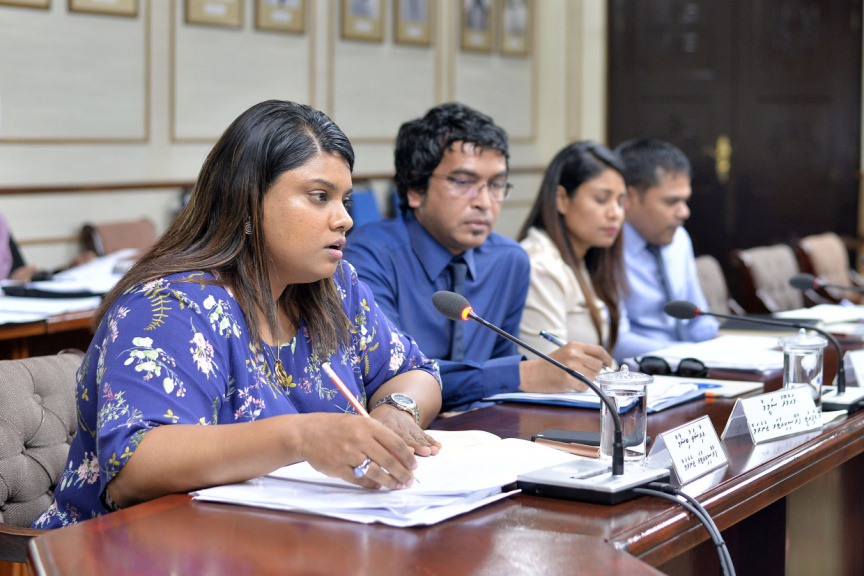 Prosecutor General Aishath Bisham responds to questions by the Judicial Committee of the Parliament on July 23, 2019. (Photo/Sun/Fayaz Moosa)

It has been revealed the renovation of the office cabin used by Prosecutor General Aishath Bisham was contracted to a private company under a corporate social responsibility (CSR) initiative.

Bisham was questioned regarding the issue by Fonadhoo MP Moosa Siraj at the Parliament’s Judicial Committee meeting last Monday.

In response to the question, Bisham said the relocation of PG’s Office from its former location to the 12th floor of Velana Building, and the ensuing renovation of the new office was carried out at great expense to the State. And that the former administration therefore made arrangements for some of the work to be carried out by a private company under a CSR initiative to lessen the burden on the State.

She said the renovation of her cabin, and other work under the CSR initiate was conducted in accordance with regulations by obtaining the necessary quotation and under the supervision of the former administration.

“I’m unable to recall which company it was at the moment. But we have all the paperwork at our office. It was done in accordance with regulations,” said Bisham.

Siraj then asked for clarification regarding the allegation the private company spent over MVR 1 million for the renovation of Bisham’s cabin.

Bisham responded that that she was unable to recall the total cost at the moment, and would supply the committee with the information later.

Bisham was also questioned regarding the deposit of money from an organization for a training in Australia to her personal bank account.

She said that the UNODC deposited USD 848 to her bank account for the training session, but that she later returned the funds to the organization as she had been unable to attend the training.

“I found it my priority to stay back and guide my team as there were several high-profile trials in progress at the time. I therefore did not partake in that training session. And I therefore reimbursed the funds. There’s paperwork to prove my claim,” said Bisham.

She also said that she never operated under influence from any politician or anyone else in executing her duties as Prosecutor General.

She said that any sudden change in the stand of the PG’s Office in any charges against any party was for credible legal reasons.

“I assure you I have never done anything to warrant these allegations,” said Bisham.